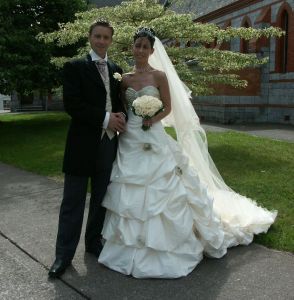 Medals didn’t feature on this occasion.  More a case of exchanging bands of gold as two of Leevale’s leading runners joined forces to become husband and wife.  Claire Gibbons and Martin McCarthy were married at the beautiful SMA church in Wilton and afterwards brought their guests to the scenic setting of the Celtic Ross hotel in Rosscarbery for a fantastic reception.
Both Claire and Martin both came through the American scholarship system, Claire at Western Kentucky and Martin at Iona College in New York.  Incidentally, Claire’s brother Stephen also attended Western Kentucky on scholarship.
The Bishop of Cork John Buckley celebrated Mass in SMA together with Fr. Cormac.  Bishop Buckley told us that he shared the same training grounds, although for different sports  as he himself is a big fan of road bowling.
Martin’s Best Man was his brother Jason who almost stole the show with a very entertaining performance after the meal.  With a microphone in his hand there was no stopping him as he went from strength to strength telling everyone of detailed events in the lead up to the wedding!!  And he didn’t stop there, going so far as to let people know just how much better looking than Martin he is, and then appealing to any single women to join with him as he was at the wedding unattached!
The meal was Beef or Salmon and was a big winner with everyone, while the band was interrupted by a troupe of Irish Dancers who quickly had everyone entranced.
At this stage there is no news of just who was the last to leave the Residents bar at 6am, but no doubt that will all be 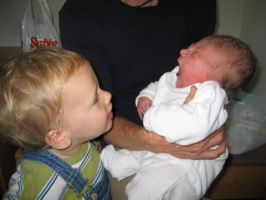 revealed later.
The members of Leevale Athletic Club join in wishing Claire and Martin long years of happiness and success and we look forward ot seeing a bit more of them over the country in the months ahead.  Photos
Another big occasion on Thursday was the arrival of Claudia May Triggs who joins her brother Will to ensure there is a plentiful supply of middle distance runners for Leevale in the years ahead.  Congratulations and best wishes to parents Alan and Laura.