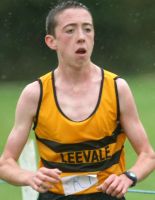 The Cork cross country championships were held over the past two Sundays.  The even ages were held in Youghal, while the uneven ages were held last Sunday in Carrigadrohid.  Both venues were scenic, although weather conditions meant there were not too many interested in the scenery.
The races at Youghal were delayed fifteen minutes because of a heavy shower of rain, while the remaining races were held in alternating sunshine and showers.
Ryan Creech, in athletics only a few months, put in a highly promising performance in the under 16 race.  He was well placed throughout  the race and had a great battle with training partner Michael O’Sullivan from West Muskerry over the second half of the race.  Both were locked together until Ryan sprinted for home with 200m remaining and he crossed the line to record his first cross country victory.
Shauna Fagan put in another great performance in the under 12 race but had to settle for second behind a much taller Rachel O’Shea from Beara.  Leevale finished 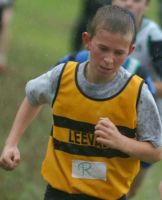 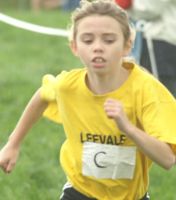 second team behind Grange Fermoy.
Louise Shanahan was another in super shape when she finished second in the under 10 race, not too far behind winner Maeve Aherne from Grange Fermoy.  Ciara Nalty ran on strongly to finish fifth, just ahead of Eirne Ni Dheasmhunaigh, and the Leevale team were excellent team winners.
Weather conditions in Carrigadrohid were much worse, with continuous rainfall throughout the day.  It was also a much tougher course with the young age groups having to run most of their races on an uphill stretch of the course.
Ryan Creech moved up an age group on this occasion to the under 17 event.  Once again he was well placed throughout, covering all moves by his opponents.  He finally took the lead going out the last lap and was soon clear to cross the line an impressive winner of his second county title in a week.
Kevin Flahive showed his strength on the tough course to sprint the last 100m of the under 11 race for another impressive win.  The under 9 race saw Sean O’Callaghan finish fourth with Brian Flahive sixth, while the Leevale team won the team contest.
Denis Metcalfe was sixth in the under 19 race, while Mark Hanrahan won the open senior event.  Photos