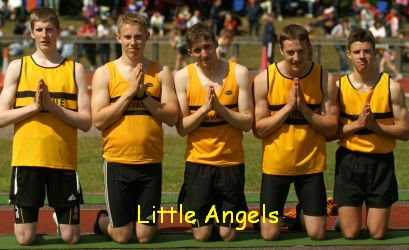 The excellent start to the season by Leevale athletes continued on Saturday at the KitKat Munster schools track and field championships held at the UL track in Plassey.  It was sunshine for most of the day, but there were a few showers, and a swirling wind was no help, especially in the longer races.
Cathal Owens continues to impress with his 400m running.  He was drawn in lane eight for the intermediate 400m, with his main rival well inside him in lane three.
Cathal got down to work from the start and ran strongly over the first half to lead going into the last 100m.  He powered his way down the home straight and crossed the line an impressive winner.  His winning time of 50.33 was a new record for the distance, beating that of Alan Clooney way back in 1986 who clocked 50.50.
Pavel Hazler was in action in the senior throws and was an impressive winner of both the discus and hammer.  He managed just two throws in the discus, 45.95m and 47.15m, and three throws in the hammer, 49.62m, 52.74m and 51.11m.
Thomas O’Sullivan had another excellent race in the senior 400m, maintaining his recent good form to finish second in 52.68.
David Quilligan is another in good form recently and he had a good third in the senior long jump with a best of 6.52m.
Ryan Creech stayed off the pace for the early part of the intermediate 3,000m and then steadily made his way up to the leader.  After a little resistance Ryan was away on his own in the lead and crossed the line in 9:02.22, a good thirteen seconds faster than he has run before.
In the senior girls events Louise McArdle won silver and bronze, finishing third in the 100m in 12.74 and second I the 200m in 26.51, with Cliona O’Shea third in 27.41.  Kate Humphreys won bronze in the intermediate 200m in a time of 26.19.
Maura Fitzgerald continued her schools medal haul with a silver medal in the shot with a best of 10.63m, while new member Sarah Bradfield won the discus with 35.48m and was third in the shot with 9.52m..
Chris Murnane won silver in the intermediate 100m hurdles in 14.35, and won bronze in the 200m in 24.02.  Patrick Maher was second in the 400m hurdles. 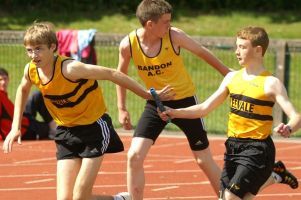 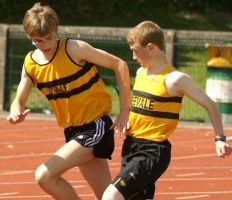 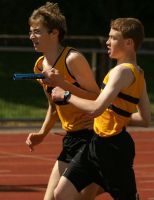