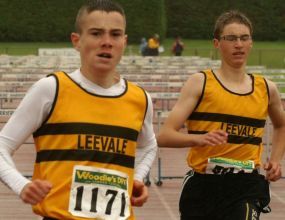 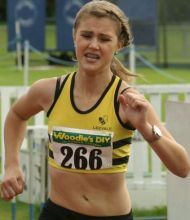 After a night with non-stop rain the track looked a dispirited site. However, 5 Leevale athletes (+ 2 judges, a press person, and supporters) were ready to face the conditions. Unfortunately April Philpott injured herself during the warm-up before the start of the first event, and could not take part. The hurdles were on first and thankfully all arrived safely at the finish. The effect of the rain showed though with non-personal best performances. Little did the U14 and U16 boys know that the ranking after the hurdles would be the same ranking at the end of the day. The long jump also suffered from the bad weather, but later on it cleared up and made it more enjoyable. In the end the 4 Leevale participants went home happy, all having obtained a medal.

Jennifer Murphy was on a mission in the Girls U15, after a bronze in the long jump, fourth in the high jump and fifth in the short hurdles at the individual all-irelands, she had her mind set on a good pentathlon containing these three events. She just had to hold form and brush up on her 800m. She competed very consistently and won her long and high jump which gave her a lead of almost 200 points after four events on her nearest opponent. With 10 points per 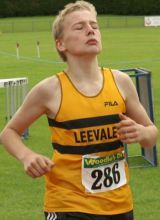 second in the 800m, her existing PB would not have been sufficient for victory. So Jennifer took no chances and improved her PB by a huge 24 second margin to become a worthy Irish champion.

In the boys U16 Leevale had two athletes: Patrick Maher and Edmond O’Halloran. Patrick is an experienced multi-eventer and was favourite to win the competition, and this he did in convincing style by winning all five events. All the U14, U15 and U16 boys did the high jump together, which meant very long waiting times, not conducive for good performances. Patrick high jumped a bit below par, but improved his PBs in the long jump and shot putt. He completed the 800m with ease and finished a substantial 378 points ahead of Edmond O’Halloran who finished second overall. This was one step up for Edmond from the AAI Indoors Combined events, and since then he has improved his long jump significantly. By all means a good season ending for him after injury trouble earlier in the year.

Eric Stam was the only Leevale U14 contender and got himself right into a battle for the medals. After two events he was trailing 176 points from the lead, but then he put in a massive shot putt PB of 10.77m (1.59m ahead of the next best) which brought him back in contention. He followed this up with a new PB in the high jump and ended up 65 points behind the leader, Shane Howard from

Fermoy, and 100 points ahead of the no. 3. For the final 800m Eric decided to sit on Shane’s shoulder and attack at the final stage. However the pair drifted off the pace a bit, and Eric kicked too early and too fast making for a tough home straight which cost him just his second place, while Shane just managed to hold on to his first place. At present senior women scoring tables are used in Ireland for the juvenile multi-events, this is putting too much weight on the 800m. Hopefully in future juvenile specific scoring tables can be implemented.

From the 32 medals handed out, 10 went to Cork athletes. This is a great result and shows that Cork is the leading county in terms of the multi-events in Ireland. Multi-events provide an excellent foundation for young athletes and it stops them specialising too early. It’s a pity that the multi-event fixtures are not getting a higher priority when it comes to selecting competition dates. Higher participation numbers could be expected when dates become more suitable. More Photos        Photos