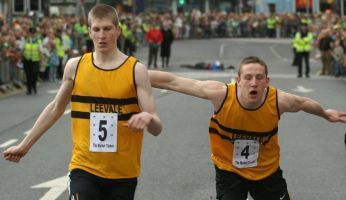 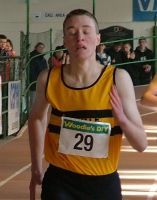 The long trip to Sligo recently was well worth the effort after four intriguing races at the Woodie’s DIY inter club cross country championships.  Weather conditions were almost perfect, although a strong wind was against the runners on the tough uphill section of Sligo racecourse.  In spite of all the rain in the lead up to the championships underfoot conditions were perfect.
Mark Hanrahan was well placed after the first couple of laps, sitting comfortably in tenth place, with Gary Murray from Belfast, Mark Kenneally from Clonliffe Harriers, and Joe Sweeney from DSD setting the pace up front.
.
Kenneally continued to push the pace with Murray on his shoulder all the time.  Halfway through the penultimate lap Murray made a break and opened up a gap on Kenneally.  From there to the finish he was on his own and he crossed the line a worthy winner, adding to the tile he won two years ago.  Kenneally held second and Sweeney was third.
Mark Hanrahan made steady progress in the latter half of the race, steadily picking off runners in front of him.  He eventually finished sixth, a huge improvement for him, and banishing memories of 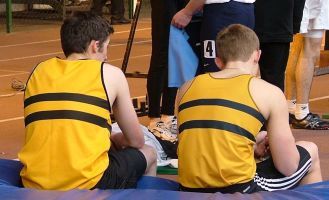 his previous race at the same course a couple years ago when he failed to finish.  Both Joe Sweeney and Mark Hanrahan were members of the Irish under 23 team that competed in the European championships in Milan before Christmas, and both are eligible to compete in the same grade next December.

Leevale finished fifth team, with Padraic Buckley, who returned from England in 31st, Martin McCarthy 37th, and James Grufferty, who returned from the US in 69th.
This was Martin McCarthy’s first attempt at putting a senior Leevale team together and he expressed disappointment that a full squad did not compete.  however, he was full of praise for the athletes who did make the effort to compete.
Sligo native Mary Cullen was another to return from the States.  She was the strong pre race favourite for the women’s race, having finished seventh in the 3,000m at the European indoor championships in Birmingham a week earlier.  She immediately went into the lead and was joined by Fionnuala Britton from Wicklow.  With just over a lap to go Britton put in a strong burst on the uphill section to which Cullen had no answer.  Britton, winner of the silver medal at the European under 23 championships in Milan, put her head down and went on to win her first senior title convincingly.

A week earlier the KitKat All Ireland schools championships were held at DCU and Leevale was well represented by Ryan Creech from Glanmire CC.  Staying off the pace for the first half of the race he made steady progress in the closing stages to finish eight in the intermediate race.  He will now take his place on the Irish schools team for the international at the same venue on Saturday week. 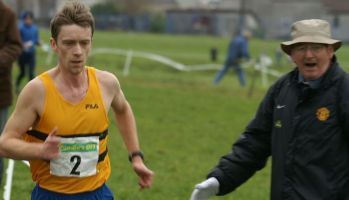 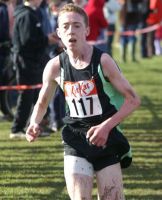 The high profile of Irish sprinting was maintained over the weekend on the local front.  The annual Market Tavern 60m sprint races at the head of the Cork St. Patrick’s Day Parade was again a resounding success, while the Woodie’s DIY national junior championships in Nenagh delivered some great competition.
The Market Tavern 60m sprints were on the move again this year as the reviewing stand was sited on Grand Parade alongside Bishop Lucey Park.  For once there were no pot-holes on the newly resurfaced roadway!  And, with the races run on a north to south direction the usual westerly winds played no part in the races.
After one false start in the women’s race the athletes had to be on their best as they lined up the second time.  There was no need to worry though as the athletes got off to a perfect start.
As the athletes crossed the finish line it proved another big success for Joan Healy from Bandon.  At just fourteen and the youngest in the race she stormed over the finish line to win in a desperately close finish from Jessika Zebo from Leevale, with Leevale’s Katey Byrd, Alanna Quinn and Aisling Gould just behind.

The men’s race also had one false start, but they were all away at the second time of asking.  This time all the athletes crossed the line in a blanket finish, leaving the officials a tough task to sort out the medal positions.  When they eventually got things sorted it was Thomas O’Sullivan from Leevale who was adjudged the winner ahead of clubmates David Quilligan and Cathal Owens.

Leevale was well represented at the junior indoor championships on Sunday.  Alanna Quinn put in a great performance to finish second in the 400m, closing steadily in the final straight.
Silver also went to Cathal Owens in the men’s 400m.  He has been making steady progress over the past few months and knocked two seconds off his PB in Belfast at the senior championships.  He had another great run in Nenagh and wasn’t too far behind the winner who is a year older.
Christopher Murnane from Leevale was second in the B 200m, with clubmate Paul Stack third.
Cliona O’Shea was fourth in the 60m, while Louise McArdle pulled up in her heat with hamstring trouble as she was disputing the lead.
There was another fourth place finish in the 200m with Aisling Gould filling that spot.  David Quilligan also had to settle for fourth in his long jump competition.