The indoor season has ended and resulted in some fantastic performances by Leevale athletes.  Highlight on the last day in Nenagh was the boys under 18 4x200m relay team who won, setting a new championships best performance in the process.  The team was Paul Stack, Chris Murnane, Cathal Owens and David Quilligan with a time of 1:34.67.
Chris Murnane and Paul Stack were also in action with the under 17 team and they also put in a winning performance with David Killeen and Patrick Maher making up the team.  Their winning time was 1:38.67.
The girls under 16 team were victorious in their relay in a time of 1:49.03.
The girls under 12 4x100m team also finished in front in a time of 59.36.
The under 14 boys team were third but were desperately unlucky to drop the baton while in the lead.  They battled back well and finished a creditable third with Sean Fogarty, Eric Stam, Denis O’Sullivan and Daire Walsh on duty.
And finally the girls under 15 4x200m relay team put in a great effort to finish a very close third.
As always the individual events produced plenty of excitement and excellent performances by each and every Leevale athlete. 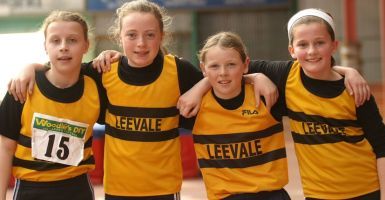 Cathal Owens had to be at his best to win the under 18 400m in a speedy 51.64, and he finished third in the 200m in 23.15, a fraction of a second behind the winner.
David Quilligan jumped 6.39m to win the long jump, finished fourth in the 60m and just missed out on qualifying for the 200m final.
Thomas O’Sullivan just missed out on a medal in the under 19 400m, finishing fourth, while Maura Fitzgerald was second in the shot.
The under 18 events saw Cliona O’Shea win bronze in the 60m and Alanna Quinn was fourth in the 300m.
Christopher Murnane won silver in his main event the 60m hurdles in the under 17 age group, and missed out by the narrowest of margins to make 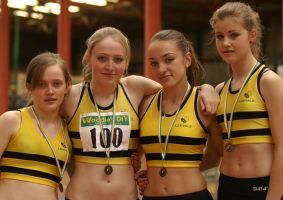 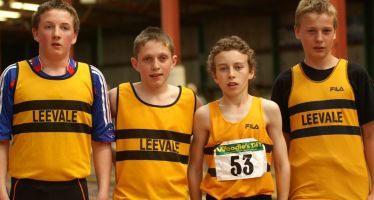 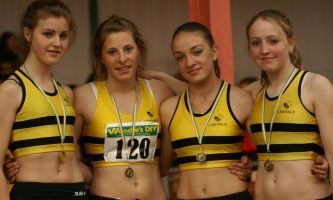