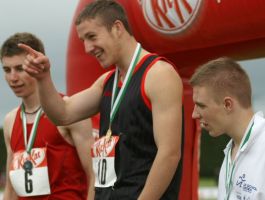 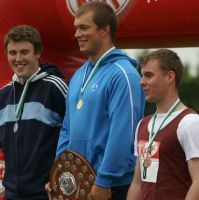 The KitKat All Ireland schools championships in Tullamore provided another successful outing for many of Leevale’s juniors.
Pawel Hazler was in great form, recording a big throws double.  In the discus he won with a throw of 46.64m, and also won the hammer with a best throw of 53.89m.
Cathal Owens added to his Munster success with a big win in the intermediate 400m, and his winning time of 50.28 was a new PB for him.  His efforts in winning the Munster and All Ireland titles gained him selection on the European Youth Olympics team.
Patrick Maher was a close second in the intermediate 400m hurdles, clocking 58.97 for the distance.
Ryan Creech closed a lot on the leader over the last couple of laps in the inter 3,000m but in the end had to settle for second in a time of 9:04.64, just outside his best set when winning the Munster title.
Chris Murnane was just outside the medals when finishing fourth in the inter 100m hurdles. 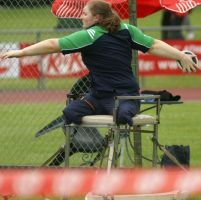 Thomas O’Sullivan had another good day at the races when he finished third in the senior 400m in a time of 51.19.
David Quilligan was in great form in the senior long jump.  His series of jumps included 6.72m, 6.80m, before settling on 6.95m, 30cm further than he has jumped before.  However, the strong winds at the championships meant the following wind was way over the permitted, spoiling an otherwise excellent performance.  It was unfortunate also that his efforts did not gain him selection on the EYOF team, but it is surely only a matter of time before he again dons the Green singlet.
The senior girls competitions saw Maura Fitzgerald follow in her sister’s footsteps by winning a silver medal in the shot, with a best throw of 10.71m.
Sarah Bradfield did likewise in the discus, and her silver medal was earned with a best throw of 32.80m.
Louise McArdle couldn’t have been closer to a medal, but unfortunately the photo finish camera showed she was fourth in the 100m in 12.57.  She was fifth in the 200m in 26.10.
Orla Barry was a big winner of the wheelchair discus with a best of 28.95m, and David Berry was second in his discus competition with a best of 27.90m.
Photos