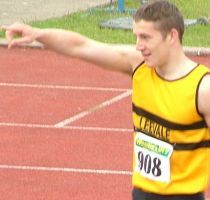 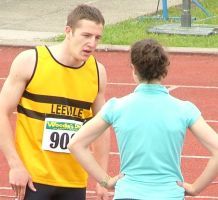 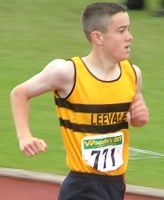 Leevale athletes were in amazing form at the Woodie’s DIY national championships in Tullamore last weekend.  A whole string of top class performances made for a highly successful championships.
Once again Cathal Owens showed great fighting qualities in the under 18 400m.  Back in fourth place after 200m he gradually made his way to the front and took the lead just when it mattered most – just before the line, to win in 50.58.  That win should put him in good stead for the European Youth Olympics over the next week or so.
Still on quarter miling, Thomas O’Sullivan was another to put in a battling display in the under 19 400m.  He went off quick and headed the field until very near the line, but he held his form well to finish second in 51.44.
Patrick Maher was in inspired form in the under 16 hurdles.  After a great start in both the 100m 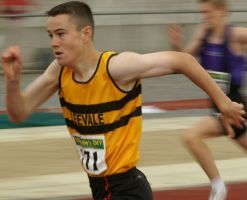 hurdles and 400m hurdles he was never in danger of being beaten in either and recorded two great wins.  He clocked 13.69 for the 100m and 33.42 for the 250m.
Edmund O’Halloran ran an excellent race to finish third in the longer event in 34.05, but clattered a hurdle in the sprint that knocked him out of contention to finish sixth in 15.55.  He was also fifth in the long jump with a best of 5.75.
Kate Humphreys was another in inspired form.  Competing in the under 16 250m hurdles she blasted out of the blocks to take an immediate lead which she held all the way to the line to win impressively in 36.76.
Sarah Bradfield was never pushed as she won the under 19 discus.  However, things were tougher in the shot where she had to settle for third with a best of 9.31m, just behind clubmate Maura Fitzgerald with 10.52 in second. 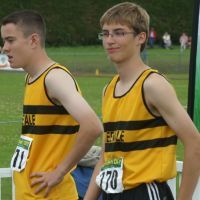 Louise McArdle ran a great race in the under 19 100m to finish a very close third in 12.73.
Another to run a great race was Harriet Cross who ran strongly throughout to finish a good second in the under 18 300m in 41.48.
Jennifer Murphy jumped 5.09m in the under 15 long jump for third place, and was fourth in the high jump with 1.50m, the same as the winner.
Another close race was the under 15 100m where Rebecca Corbett was a close second in 12.77.  April Philpott just missed out on making the final.
Jennifer Murphy was fifth in the under 15 80m hurdles in 12.78, with April Philpott sixth in 13.41.
Jessie O’Flynn took the lead in the third round of the under 14 hammer, but was overtaken in the last round and had to settle for second with a best throw of 31.37m.
Claire Crowley was fifth in the under 18 100m in 13.04, with Cliona O’Shea just missing out on the 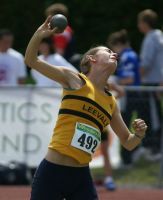 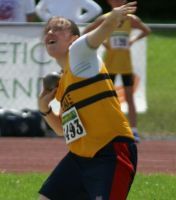 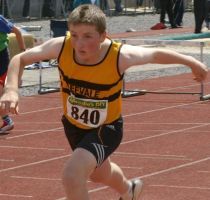 final with 13.06.Chris Murnane was less than half a second behind the winner in the under 17 300m hurdles, finishing second in 41.02.  Earlier he was the victim of a ‘faulty’ start (that’s what the officials said!!) in the 100m hurdles where he finished fourth in 14.55.
Eric Stam was also in tremendous form in the under 14 age group.  In the javelin he was well behind until he launched a massive 35.28 in the third round, which was good enough to give him victory.  In the hammer he threw a paltry 10.31 in the third round after two fouls.  His fourth throw was much better though, with another massive 32.65 to put him in the lead.  That was it though because he fouled his last two throws, but he had done enough for victory.  And he was fourth in the high jump with 1.45 as well.
Zack Gibbons was sixth in the hammer with 26.94, fourth in the discus with 25.81, and fourth in the shot with 10.33.
Daire Walsh won two silver medals in the under 14 age group.  In the 75m hurdles he was just a fraction behind the winner in a time of 12.31, and he was second in the high jump with 1.55, the same as the winner.  He was also seventh in the long jump with 4.66, with Denis O’Sullivan one place back with 4.65.  Denis was seventh in the 80m in 11.11, while Robert O’Halloran was 10th in the under 13 high jump with 1.25.
What an incredible performance by all these young athletes.  Well done to one and all – as well as those who did not get a mention.  And well done to the coaches and officials for a job well done.