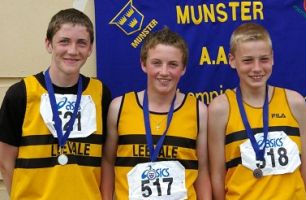 June 21st 2007.  The weekend of the 9th\10th June was the warmest this year so far, and at times athletes and officials on the track at Castleisland would have wished for some shelter from the beaming sun.  The organisation provided plenty of energy drinks (Lucozade Sport), which was much appreciated.  This year the competition format for U10 and U12 changed to a two-by-two team competition, which is an improvement as children of that age shouldn’t really be exposed to the stresses of individual championships.
Leevale had a great weekend with a total of 10 Gold, 10 silver, and 10 bronze medals.  Within the U13 & U14 categories 19 individual qualifying results for participation in the All Ireland’s were obtained (last year 18 qualifying results).  Probably 15 of these qualifying performances will go forward since the athletes can compete in 3 individual events plus the relay.
The Under 14 boys were in great form.  Highlight was their 4×100 relay in which they broke the Munster Champion Best Performance.  The record stood since 2000 with 53.28 sec., but was lowered to: 52.57 sec..  It was also good to see more athletes taking part in the five throwing events.  Not all the results were available, but the attached table shows most of the finalist performances.  Details and Photos