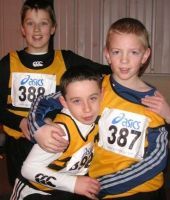 The magnificent Odyssey Arena in Belfast certainly had a big effect on athletes competing there, with a long list of new PB’s set in almost every event.  The small group of Leevale athletes who travelled the length of the country to compete all arrived home in a positive frame of mind.
Both Derek Duff and Carl McNamara qualified for the B final of the 60m after each of them set a new PB in the semi finals – Carl with 7.03 and Derek with 7.08.  However, there was misfortune for Carl as he was DQ’d after a second false start.  Derek finished fourth in 7.10.
Darren O’Donovan clocked 7.20 in the preliminaries after a spell of injury, while David Quilligan clocked 7.51.  David also competed in the long jump and had just one jump recorded – 6.15m.
Carl and Derek also took part in the 200m with Derek finishing fourth in the A final in 22.48 and Carl won the B final with 22.34 – two more PB’s.
Cathal Owens smashed his PB in the 400m with a time of 51.66 in the first round, some two seconds better than his previous best time.
In the women’s events Ailis McSweeney won the silver medal in the 60m, but had to fight hard to overtake Claire Brady who had the same finish time of 7.64 after both had clocked 7.62 in the heats.  Louise McArdle clocked 7.93 in the heats and 26.69 in the 200m, where Cliona O’Shea clocked 27.43 and Aisling Gould 28.74. 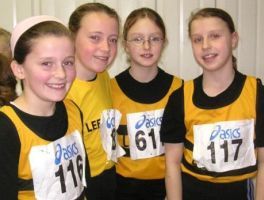 In the 400m Jessika Zebo finished second in the B final in 57.29, while Katey Byrd was fourth in the 60m hurdles in 9.52.
The only complaint in Belfast was that the heating was set a bit too high, although the athletes obviously loved it.  Just imagine what a bit of heating in Nenagh would do for them!!
Well done to Carmel Parnell who finished third in the McMahon Galvin national masters cross country championships in Santry and to Carl McNamara who was fourth in the 200m at the Celtic Cup international in Cardiff.
Last weekend saw many of the younger Leevale athletes travel to Nenagh for the first time.  It was not cold as usual there and all of the athletes came away with a positive experience. The under 10 and under 11 age groups were held as 2X competition, in general this worked well and brought a good team spirit into the event. While all of our athletes performed exceptionally well special mention is required for Chelsie Wright, Sean O’Callaghan, Ciara Nalty and Brian Flahive who impressed in each of their respective events.
Results