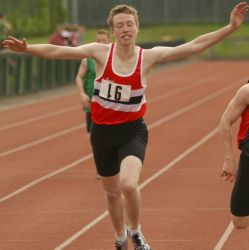 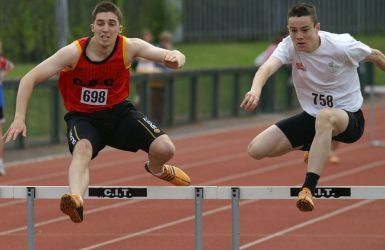 The schools track and field season probably ranks as the most important competition for underage athletes.  It attracts the attention of the media year after year and eclipses clubs competition by the proverbial mile.  With so many other competitions on during the month of May the advice to all young athletes would be to concentrate on schools.
Once again the South Munster schools championships were held over two Saturdays at the CIT track and resulted in more fabulous performances by Leevale athletes.  One of the highlights must surely be the performance of Thomas O’Sullivan representing Colaiste an Spiorad Naomh who really came into his own with a sparkling double.
He judged the senior 400m to perfection hitting the front just as he entered the home stretch and then held on well to withstand  the strong challenge of Ciaran Kenny and Ronan Duggan, to win his first ever schools title.
Later in the afternoon Thomas displayed a new confidence as he powered his way to victory in the 200m for a great double.
Chris Murnane and Patrick Maher shared the spoils in the two intermediate hurdles races.  Over 100m the pair of them cleared the final hurdle together, and then the mad dash to the line saw Chris just get his head in front to win. 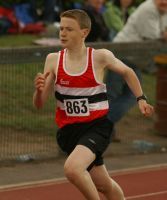 The 400m hurdles was another desperately close affair, but this time it was Chris who was the stronger, just getting ahead in the closing stages to take the title.
Ryan Creech was never pressed as he raced to a nice double win in the 1,500m and 3,000m at intermediate level.
Pavel Hazler has improved a good bit from last year and he showed it with a fine winning double in the senior hammer and discus.  His discus best was 47.79m, and he threw 53.61m for the hammer.
David Quilligan continued on his winning ways with a good win in the senior long jump, while Cathal Owens was in a league of his own when winning the intermediate 400m.
Louise McArdle completed a nice 100m/200m double in the senior girls competition, while Kate Humphreys won two silver medals over the same distances at intermediate level.  Rebecca Corbett repeated the double silver feat in the junior 100m and 200m, and added gold when winning the 300m hurdles.
Alanna Quinn won the inter 300m, and David Killeen won the junior 200m, together with bronze in the 100m and long jump.
Paul Moore was second in the inter javelin; Edmund O’Halloran was third in the inter long jump; Emma Gayer was third in the senior 400m; Maura Fitzgerald was second in the senior shot with Sarah Bradfield third.
Well done to everyone who competed