After putting together a string of superb performances in recent weeks Leevale’s Ryan Creech was the recipient of the Fitzgerald’s Vienna Woods Hotel Glanmire & District Sports Award for the month of January.  The presentation was made today at the hotel during the course of a superb lunch at the hotel.
In recent weeks Ryan won the KitKat Munster schools intermediate cross country championship as well as finishing second in the Woodie’s DIY national junior indoor 1,500m and he is making great progress in his athletic career.
The Lord Mayor of Cork Cllr. Donal Counihan was amongst the invited guests, along with members of Ryan’s family, Glanmire 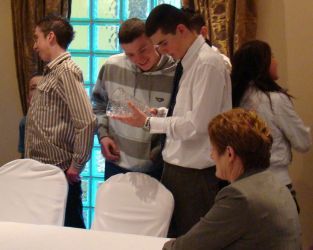 Community College, Leevale athletic club, hotel management, and members of the press.  The presentation was superbly organised by Sean O’Sullivan.
The Lord Mayor congratulated Ryan on his achievements and complimented Vienna Woods for their sponsorship.  It was, he said, very heartening to see that an enterprise such as the hotel would give something back to the local community.
Michael Magnier of Vienna Woods also congratulated Ryan  and looked forward to seeing his photo at local, national and international levels in the years ahead.
Noreen Murphy, Chairman of Cork County Board and Liam Horgan, Chairman of Leevale, also spoke highly of Ryan’s achievements.