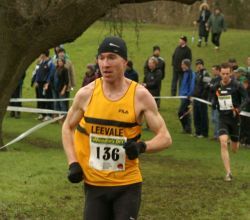 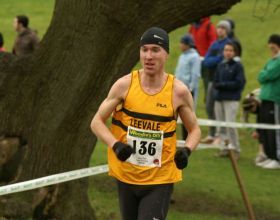 Cathal Lombard was one of just two Leevale athletes who made the trip to Belfast for the woodie’s DIY national inter club cross country championships yesterday.  Without doubt this was a tough course, and if evidence of that was needed, you only had to look at the finish of the junior men’s race where the leading finishers all collapsed over the line.

The course provided a serious challenge and was totally unsuited to track runners.  Recent rain left the course waterlogged in places and the one steep uphill section was covered with sand to make it more of a sand dune than anythng else.  Other sections of the course were rough, but at least it did not rain, although it tried hard. 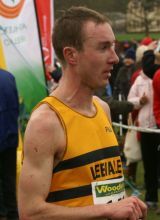 From the start Cathal was up with the leaders letting everyone know what his intentions were.  As the race progressed the lead group gradually got smaller until it was just Cathal and Alistair Cragg.  Cathal continued to push the pace and eventually started to increase his lead, which got up to over twenty seconds at one stage.  He reveled in the conditions, gliding over the mud and up the hills, while those who race regularly on track and roads simply got stuck.  It looks very much like the true cross country runner is becoming a thing of the past.

Alistair closed on Cathal in the closing stages, with just eight seconds separating them at the finish, but times were very slow.

The big disappointment was that there were just three Leevale members at the championships to witness the tremendous achievement of Cathal who has had five top eight finishes in this race since 1999.  Thomas Maunsell also competed, finishing in 50th position.