Leevale middle distance stars, Ciarán Ó Lionáird and Mark Hanrahan, were in flying form at the Folksam Grand Prix in Gothenburg tonight, finishing 5th and 6th respectively in the 3000m final. Ciarán continued his good recent form and was only just pipped for 3rd place, finishing in a time of 8:07. Ciarán’s run was all the more impressive coming as it did only days after his second place finish in the 5000m at the European Cup in Tallinn. 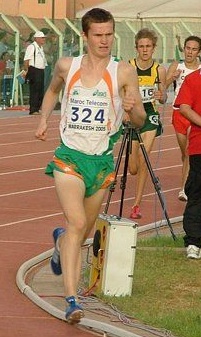 Mark was just three seconds behind Ciarán on the night, getting a deserved PB of 8:10 in the process. It has been a fantastic season so far for Mark, who has made a great recovery from an injury that had his athletics career in doubt until only a year ago.

Action from the 5000m in Gothenburg