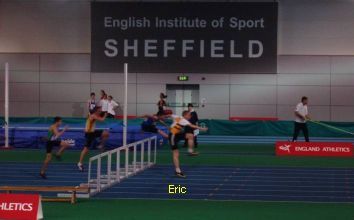 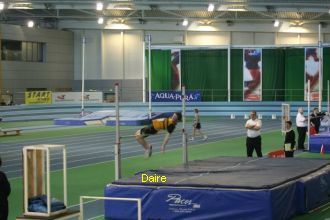 Three Leevale athletes took part in this competition and were accompanied by four supporters.  All three had to complete a pentathlon. The combined events in the UK are possibly the strongest in Europe, so competing at this level was both inspirational and intimidating. For an athletes’ impression please check “The Real Athletic Experience” (Below). Having to high jump against a 14 year old with a 1.92m PB or to long jump against a 6.14m jumper might be a humbling experience, but it is also amazing to watch and makes you rethink your own targets. 19 athletes took part in the boys U15 and 34 athletes in the girls U17, so great competition among them was guaranteed.
A total of 12 personal bests were achieved, and 4 of them were new club records. Eric Stam got off with a flying start and won his 60m hurdles heat convincingly and improved his PB by a huge margin of 1.3 seconds. His next 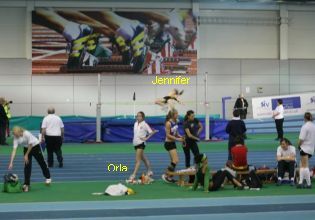 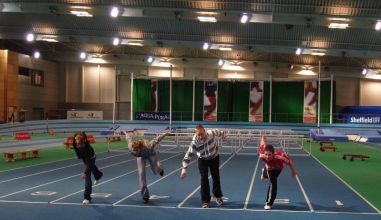 best improvement was in the 800m in which he reduced his PB by 12 seconds, and an improvement of his long jump PB by 22cm to 5.17m was also very rewarding. The only event that let him down was the shot put. He has been changing his technique from a glide to a rotational technique this winter and needs time to adjust to it. He came 6th overall and despite the heavier shot put weight (4 kg instead of the Irish 3.25kg) improved on Daire Walshe’s club record. Daire also started off with a PB in the hurdles, but had to get over disappointment in the long jump in which he jumped 42cm less than a week earlier in the Munsters’. He recovered in great style by achieving impressive 5th, 7th and 6th places in the high jump, shot put and 800m respectively. He came 9th overall with a new personal best score. Jennifer Murphy an U16 in Ireland had to compete in the U17 girls’ event which is a big disadvantage, but next year she can compete again in this age group. In the UK they use the 1st September as a basis for changing age group, which means that Eric can also compete in the same age group again next year. Strangely Jennifer, like Daire, also struggled with the long jump and jumped 44cm less than the week before. Her other events went well, and she took a massive margin of 14.8 seconds off her 800m PB. She shared 25th place overall. Her overall score was also a PB and club record. The results are listed in the table below.  A great trip was had by all and there is appetite for more.