The Munster U15-U19 Indoor championships were held in Nenagh on March 2nd & 3rd. Leevale were missing a number of athletes due to injury and this was evident in the fact we were not able to field competitive relays in many age groups. However the athletes who did compete fared well.  Kate Humphries ran well in the GU16 60m & 200m finishing a strong second to Joan Healy of Bandon in both events. Rebecca Corbett won a brace of medals in the GU15 sprints. Daire Walsh won four individual medals plus a relay medal U15, while his clubmate Eric Stam comfortably won the high jump at 1.60m. Unfortunately Eric missed the Saturday competition. We are looking forward to seeing these athletes going head to head at the national competition next month. Denis O’Sullivan beat his team mates to take bronze in the 60 sprint. Patrick Maher won the BU17 hurdles from his team mate Edmond O’Halloran. Patrick also collected a second and third place in the
60m & 200m respectively. It was great to see Eric Curran make a return to competition and he comfortably won the 1500m on Saturday and was third in the 800m on Sunday. 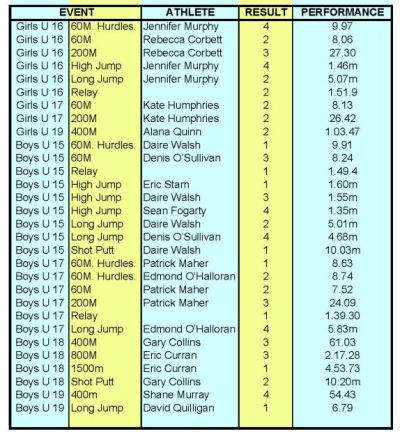