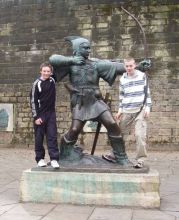 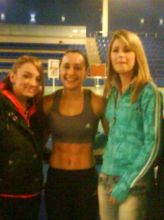 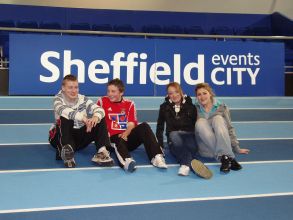 On Friday the 7th of March we flew into East Midlands airport and drove from the airport to Sheffield but stopped in Nottingham on our way. We went shopping and the boys went looking for Robin Hood (comment boys: we first went to Pizza Hut and ate loads from the unrestricted buffet, then went up in a Ferris Wheel and had to endure going around 8 times, then went looking for Robin Hood – as you can see on the right we found him). We then went to Sheffield and after checking into our hotel went for, only a 5 minute, walk to the England Institute of Sport Athletics Indoor Arena. Inside we just stood there speechless just looking at the track was amazing. We noticed someone hurdling at the side of the track and decided to go over to watch and couldn’t believe we were watching Jessica Ennis hurdling (ed. Jessica is a world class heptathlete, who skipped the Worlds in Valencia prepare for ….. Beijing Olympics? http://www.jessicaennis.net/ ). Her coach called us over to meet her, she was so nice, 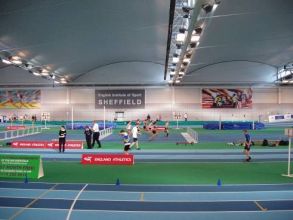 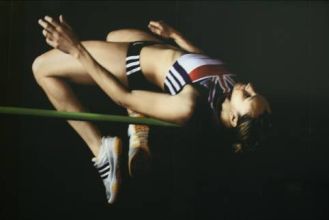 we got pictures (see left) taken with her and she wished us luck in our future in athletics. (comment boys: it was me, Daire, who recognised her  when we were doing laps.”). There is a massive poster of her at the entrance of the arena (picture on right). We then walked to a nearby outdoor athletics track Don Valley (while the boys checked out an impressive ice stadium) with a 25,000 seating capacity which has been used for the World Student Games in the past. We arrived just before a rugby match and the second we said we were Irish they took us on a private tour. The facilities for Athletics in England are amazing. Just by coming here we have seen a whole new side to athletics. We were treated like professionals and even were called up to give our indoor and outdoor PBs for the commentator. They had something like 7 officials per event (see picture below) and they were all very relaxed and helpful. Also the results were clearly shown to the spectators and PBs were an-nounced by the commentator. Everything is so organised and of such high 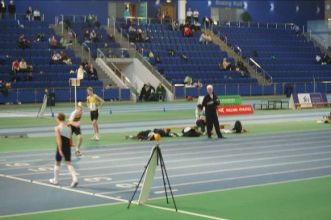 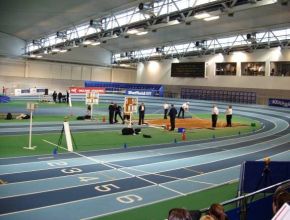 standard, that you really want to do well. The track itself was bouncy and felt very fast. There is plenty of space around the track where you can do warm-up, practice long jump, hurdles, shot putt, even throw discus and javelin. They also have mats for stretching and exercise equipment besides the track. It’s nice and warm everywhere in comparison to the indoor track used for juvenile competitions in Ireland where so many get injured. (comment boys: the track is amazing and the facilities are  top class. They have brilliant stands with comfy seats (see picture below) and you could get a massage besides the track if you want. More famous people were in the arena as the world snooker qualifiers were being held at the same time).

We have only seen one indoor track in England, but we don’t like going back to our indoor track in Ireland. We have come to the conclusion that it is extremely hard for any Irish athlete to become world class if we don’t have proper indoor competition and training tracks close to us.