Derval narrowly missed out on a medal at the World Athletics Championships in Berlin after finishing fourth in the final of the Women’s 100 metre hurdles. This was truly an outstanding performance, the greatest ever by an Irish sprint athlete.

Derval set an Irish record in an incredible performance with a time of 12.67 seconds from lane one, beating both the Olympic Gold and Silver medallists is doing so. 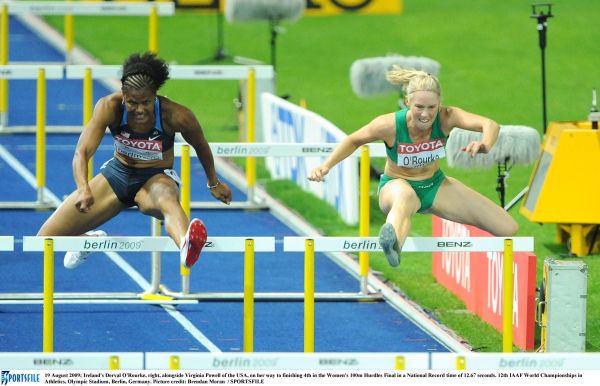 The Leevale athlete had a lightening start and was close to leading at half way before the rest of the field pulled her back but the 28-year-old had enough quality to push through in the last 50m and take fourth place in what was truly world class competition.

Earlier today Derval finished fourth in her semi-final in a season’s best time of 12.72 second to qualify for the final.

Brigitte Foster-Hylton of Jamaica took the gold. Priscilla Lopes-Schleip finished second while Delloreen Ennis-London from Jamaica took the bronze, 12 hundredths of a second ahead of Derval.

Derval told the BBC: ‘I’m so gutted not to get a medal. I had no idea where I was. It is a national record and I’m the fourth best in the world so I can’t complain.

She added: ‘I’ve had so many bad days so I can take this and smile’.

This rounds off a fantastic season for Derval, which began with the bronze medal in the European Indoor Championships back in March. The future looks incredibly bright for this talented athlete.

We are extremely proud of Derval and her world-class performance.