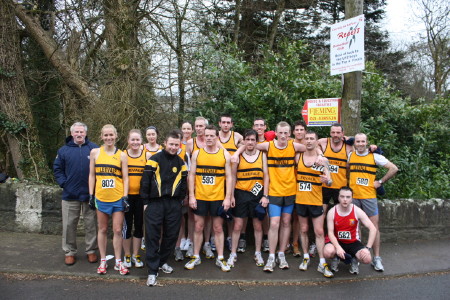 It was a great day for Leevale at the Cork County Novice & Masters Road Championships, held at Carrignavar today. There were team victories in the Men’s and Women’s Novice, a team second in the Masters Men, an individual win in the women’s event, and a fantastic turnout in the men’s event with 12 Leevale runners competing overall.

The 4-mile Novice Men’s race was won in 21:40 by Leevale-bound Barry Donovan. It was a hard-fought victory, won in a tight finish from Grange-Fermoy’s Gary O’Sullivan. Not far behind was George Boyle, who is currently coming back from an injury. Masters John Collins and Mark Bickerdike were 13th and 15th overall, finishing 2nd in the O50 and 1st in the O45 categories respectively. Also in the mix for Leevale were Kieran Collins, John Hallahan, Chris Harrington, Owen and Fergus Cummins, Damien Collins, Stephen Walter, and Batt Kearney, leading Leevale to a win in the Novice team event and second in the O35.

The 2-mile women’s event was new Leevale recruit Annette Quaid, who is returning to running at a competitive level, just four seconds ahead of Jessica Vonhatten. 10 seconds further back was newcomer Sinéad O’Connor, who ran a great race to finish 5th. Andrea Bickerdike completed the Leevale scoring four in 8th, ensuring a comprehensive victory for the Leevale women.

Overall it was both a great turnout and performance by the Leevale teams. Almost all who took part are training this year with Donie Walsh’s group in the Mardyke, and much credit must go to him for today’s success.