A FIGHTING Derval O’Rourke came to the rescue of wounded Irish morale when she put recent mediocrity behind her to win the bronze medal in the final of the women’s 60 metres hurdles at the European Indoor Athletics Championships in Turin yesterday. 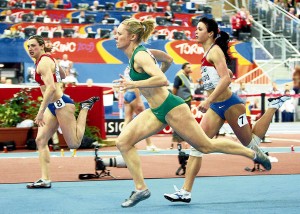 This was Ireland’s 12th medal won in these championships since they took on official status in 1970, and it could not have come at a better time, both for the Irish team here and for the Cork woman herself.

She experienced the high life of success in major events in ‘06 with a World Championship gold and a European silver, but has been through hell in the two and a half years since, crushed in both the World Championships and the Olympic Games.

Consequently, it was understandable why O’Rourke was so anxious to explain how she managed to pull herself up by her bootlaces and go into last night’s final full of hope and no little confidence.

Because of what happened to David Gillick in his semi-final of the 400 metres less than an hour earlier — and the manner of his elimination — there was a heavy weight of responsibility on the shoulders of the 27-year-old to do the business and run as if her life depended on it. She did that when coming home in 7.97 seconds, her fastest time of the season, and her best since her Moscow exploits in ‘06. She gave it everything and was in contention for better over the first three of the five flights before 22-year-old Belgian, Eline Berings — last in Birmingham two years ago — came through to claim the gold in 7.92, a new national record.

It took another national record of 7.95 from Lucie Skrobakova of the Czech Republic to deny O’Rourke the silver, with the judges taking an unusually long time to split the placed athletes.

O’Rourke showed yesterday that she was in the best shape she has been for over two years, winning her heat in 8.06, her first victory all year, before also winning her semi-final in 8.00.

After her medal-winning performance, O’Rourke explained that certain people never lost faith in her, not least her coaches, Sean Cahill, and his wife, Terri Horgan.

She had heard something about Gillick, but she told Sean before her final that she did not want to know the details.

“I had my own nerves to deal with, because I felt winning it was within my grasp, and right now a percentage of me is disappointed,” said O’Rourke.

“But the rational side of me knows I have a gold, silver and bronze from major championships and this has come after two years of torture.

“But it’s very hard for people to think you are amazing when you walk off an Olympic track with your head down. But Terri and Sean did, and we started training in September up in a hill in Meath, with their three little children and Ailis McSweeney, my best friend in the world, and they had faith in my that I might have doubted myself.

“But I think it took until this today for that faith to be totally restored, and Sean and I believed going in the final that I was capable of running a lifetime best but 7.97 will do for now.

“But even after I ran that 8.33 in Moscow, my support team still felt I could win a medal here. In Ireland we build people up and we talk about people, but not that many Irish have won medals in championships. This effort today makes me a bit proud of myself.”

“This is the fastest I’ve run since ‘06 and so I have to take it and roll on for outdoors and try and make the final of the World Championships in Berlin. That is definitely my next target.”

Report extraced from Tom O’Riordan’s article in the Irish Examiner 7.3.09