The race of the championships was certainly the women’s 100m final. Ailis Mc Sweeney was in great form leading up to these championships and looked supreme in the morning heats. The final was run into a headwind of -3 m/s. There was a tremendous battle for the tithe between Ailis and the Ferrybank duo of Kelly Proper and Niamh Whelan. Ailis eventually won by the narrowest of margins, one hundredth of a second. It was fantastic to see Ailis capture her first senior outdoor title in such a dramatic race. 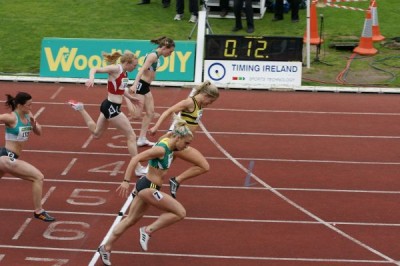 Deirdre Murphy won silver in the discus. Strong men Joe Nagle and David Tierney teamed up in the shot where they won a silver medal in the relay. For the Leevale following the real excitement came in an unlikely event. In the U23 35 lbs over the bar newcomer David Tierney had the spectators enthralled with his exploits. He easily won the event with a huge height of 5.10 metres. This was a great performance considering it was David’s first time doing the event.

Deirdre Murphy’s trip home from the US was rewarded with a gold in the shot. This was Deirdre’s first national senior title. In the 400m Louise McArdle, who continues to improve with every outing, ran a brilliant race, finishing very strongly and winning a bronze medal. This is her first at national senior level.

Joe Nagle and David Tierney again teamed up in the 56lbs for distance where they picked up a silver medal in the team relay. In the 3000m Junior championship Ryan Creech showed that he is again back in form after a year of injuries and he finished a very strongly for a silver medal. The final race of the day was the men’s 1500m. Mark Hanrahan easily qualified from the heats on Saturday. In the final the slower early pace did not suit Mark. However he covered every move and finished a very close third and was only edged out of the silver medal by 5 hundredths of a second. Thomas O’Sullivan was another notable performer.

In all it was a great weekend for Leevale athletes, who returned home with a total of 11 medals.