The Woodie’s DIY Inter County Cross Country Championships were held in Kibeggan today. Conditions were tough for the competing athletes, however given the amount of rain that fell during the week, the course was in relatively good condition.

In the boys U12, Matthew Murnane and Barry Shanahan were competing for County and Provincial teams. Matthew was a member of the Cork team that finished in second place. Barry also ran a strong race to finish in 7th place on the team.

Louise Shanahan finished in 12th place in the girls U14 event. This was a fantastic achievement for Louise as she moved up an age to compete at this level. Louise was a member the Munster team that won and the County team that finished second place. 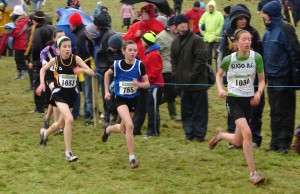 Philip Crowley, competing at U16 in his first national cross country championships, finished in 15th place. As a result he was a member of the winning Munster team and the second placed County team

Ryan Creech’s return to form continues with a third place finish in the junior race. Ryan set a fast pace from the start and soon had the field stretched as runner after runner dropped off the pace. Going out the last lap it was Michael McKillop from Antrim who surged into the lead and was soon clear, holding himself well to win comfortably from Liam Tremble from Dublin and Ryan. Third place guarantees Ryan a place on the Irish team for the upcoming European Cross Country Championships. Leevale athletes Shane Maher and Stephen Walter also scored for the County team, which finished in second place.

Lizzie Lee mixed it up with the experienced international senior women, to finish in 14th place. Lizzie has definitely set down a marker in her first year competing in athletics.