Conor George talks to Leevale and UCC coach John Sheehan about the need for an indoor arena so that Cork athletes can compete with the best.

FOR the first time in his illustrious 30 year career as an athletics coach, John Sheehan cancelled a session for his athletes. Why?

Because it was so cold and wet that he was afraid his sprinters would pick up an injury.

Prudence won out and while he knows he made the correct decision, it rankles. Had Cork a proper designated indoor athletics arena it wouldn’t matter the weather conditions.

“As a matter of fact I think there should be one in the South of the country and in the North.

“It would hugely help our athletes and we would be able to train all year round, irrespective of the weather conditions.”

Sheehan’s desire for an indoor track has little to do with mere convenience. And his abhorrence of the cold has absolutely nothing to do with a personal preference for dry environs. It’s to do with his athletes’ well-being. “The reason why I had to cancel the training session was that I was afraid one of the sprinters would tear a hamstnng.

“Sprinters need warm weather or they run the risk of injury. That’s what the issue is.

“In this country sprinters are training under awful conditions for their craft. “It’s very cold and sprinters need a bit of heat. We’d have comfort indoor; we would be able to go in there and do speed sessions at any time of the year.

“At the moment you’re conscious that it’s so cold. As coach you’re trying to get speed into people but there is the constant fear that someone will pull a hamstring.”

Last weekend John travelled with many of his athletes to Belfast for the National Indoors. The problem, aside from the cost involved in traveling the length of the country, is that the track is Belfast is a temporary one.

“They laid the track for the weekend and then take it up,” he explained.

“A lot of athletes won’t compete there as a result. The word is that the bends are bad. I don’t know but it’s certainly not ideal.

“The Nationals used to take place in Nenagh and while that track isn’t great I wouldn’t knock it because of the effort it took to build the place. “That was a club effort by Nenagh and it is a very fast track. All our best athletes have run there and have run qualifying times for international meets.

There is a move to build an indoor track in Cork with Leevale Athletic Club actively pursuing the project.

If their dreams come to fruition it would be the first permanent indoor arena in Ireland capable of holding IAAF Meets.

There is the obvious benefit a modern indoor track would provide to Cork in that the National Championships could have a permanent home which would help boost the economy.

From a purely athletics perspective the benefit would be huge according to Sheehan.

“In the last ten years or so the sprinting has taken over from middle distance.

“I would put that down to Nenagh, new techniques and raw talent. If we had the proper facilities I guarantee there’d be a massive improvement in our athletes.

“People would travel to Cork to hire out the track just to train.

“It would help our sprinters to improve and be competitive on an international stage with far more regularity.

“And if we’re serious about trying to develop our athletes – the association (AAI) is serious – then the government has to get involved too and back this project in Cork between Leevale and CIT.

“We need the facilities to match our ambitions. And the ambitions are there, the talent is there, we now need to nurture that talent and provide it the best possible training facilities.” At least then John wouldn’t have to cancel any more training sessions.

• John Sheehan is Director of Speed with AAI. He is also a coach with Leevale Athletic Club and University College Cork. 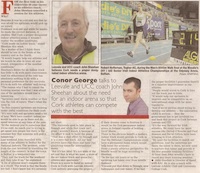