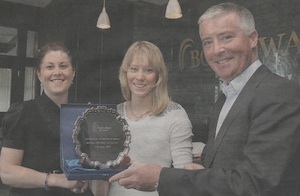 After the awful disappointment of Doha and her injury-forced withdrawal from the world indoor championships, Derval O’Rourke went on a shopping spree in Miami but now she’s ready, steady, go… to run on home soil.

Ireland’s queen of the track and the hurdles has plans to run in the Leevale Sports meet here at home on April 18.

“I am thinking about coming down and doing a relay at the Leevale sports because I think it would be good fun. I could ease myself back into it.

“I don’t get to run enough at home and this would be a good excuse to get back,” said Derval who picked up the Boardwalk Sports Star of the Month award at a luncheon yesterday.

“Leevale put on a brilliant open sports event and I wasn’t there last year – I just heard about it – but I’d love to come down and do it this time.
“I plan to do a few 100 and 200s in May, still train very hard and be competitive but just run at the weekends and then start to hurdle in June,” she said with an eye on Barcelona.

“You have to make a final and get through the rounds pretty cleanly and then you’ve got the ten hurdles and there’s nothing guaranteed there.
“If you make the final, then you have got to run to win it, what else can you do?

“I think I have a chance of winning gold there but then so do five other Europeans,” she said.

O’Rourke won her 10th consecutive national title when winning the women’s 60m indoor title at the Odyssey Arena in Belfast in the first week in February.
She ran 8.18 seconds to qualify for the worlds and then in Norway she ran eight seconds flat for the personal best and the fastest time of the year.
Reflecting on the pain and disappointment of Doha, Derval said: “It was very disappointing to lose out on the world indoors because of the injury but everyone was so nice to me it softened the blow.

“I sort of forgot about it and no one in Florida seemed to know or care about it.

“My hamstring is fine now and I had a run earlier this week. I have also been to the gym but it was just terrible timing.

“I have had worse injuries, I have had stress fractures and muscle tears and it was a real pain in the sense that it was probably the most minor injury I have ever had and yet it ruled me out of the big event,” she added. 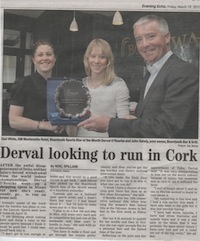