Leevale’s European silver medallist Derval O’Rourke finally got to meet one of her sporting heroes earlier this week, when she was a guest along with Roy Keane on RTÉ’s John Murray Show. The programme made for entertaining and informative listening.

This story appeared in the printed version of the Irish Examiner Thursday, November 11, 2010 and online.

SO what happens when two Irish sports stars like Derval O’Rourke and Roy Keane go head to head? Well, it turns out they get on swimmingly.

For Derval, herself no stranger to sporting success being the European silver medallist in the 100 metre hurdles, it was a chance to interview her sporting hero.

For Roy, it was a chance to quiz the athlete on speed drills and all manner of other coaching techniques. Armed with a bundle of questions and an RTÉ microphone, Derval met Roy at the Ipswich training ground and the two had a natter about all things football and non-football.

In terms of football questions, Derval wanted to know about his mindset standing in the tunnel before a big game, seeing as he looked like he “was going to kill someone”.

“No I wouldn’t say that was going through my head but I was getting ready to go into battle. Again, you would have your preparation during the week, trying to eat properly, the right training, getting enough rest. Just before the game, particularly as captain, whether with Ireland or with United, that was the part I really looked forward to. The talking was over and it was time to get on with it.

“My mentality was always to just get focused on the match. I wasn’t a great one for being pals with anybody in the tunnel or shaking hands. It was a case of ‘listen, let’s get on with it and may the best team win’,” explained Roy.

He also had advice for any youngsters who dream of becoming a professional sports star. Refreshingly simple, his message was listen, be determined and don’t let anybody tell you that you can’t do it.

“You have got to believe in your dreams. When I was 14 or 15 I was told I was obviously too small. I always took that on and said ‘I’ll show you who is too small’ and I was pretty determined to become a footballer and, again, with a bit a luck along the way, I managed to have a half-decent career.”

Outside of football, Derval was mostly interested how Roy’s famous dog Triggs was doing. Fine by all accounts. 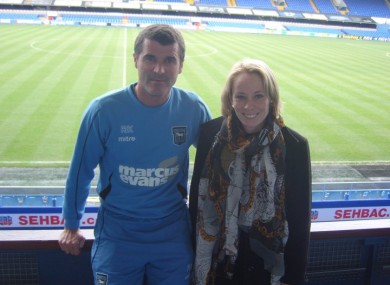 Reports of her passing were premature. It also turns out, Roy is not a man for the kitchen if left on his own.

“I couldn’t boil an egg for you. But, listen, it doesn’t keep me awake at night that I can’t cook. I can do other stuff,” he explained.

Defeats are what Roy struggles with, so much so that even his dogs “go hiding” after a bad result.

“I try not to bring bad results home with me but usually, they can tell by the way I get out of my car whether we won or lost. They’ll know by the body language. It’s strange, even the dogs know.”