Sprint hurdler Derval O’Rourke has today been named The Irish Times / Irish Sports Council ‘Sportswoman of the Month’ for July following her recent silver medal in the 100m Hurdles at the European Championships in Barcelona. This is the fourth championship medal that the 29-year-old Leevale athlete has won and with a time of 12.65 seconds the former World Indoor champion took .02 of a second off her previous best and has set a new Irish record. 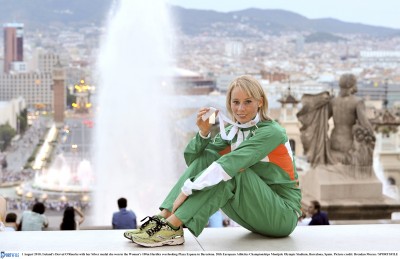 Derval is now in the history books, alongside her heroine Sonia O’Sullivan, for being the only Irish athletes to win medals at more than one European Championships. Her silver in Barcelona was just Ireland’s 11th medal in the history of the event.

While her silver lifted the spirits after a disappointing Championships for the Irish team, she was torn between contentment at running a personal best and frustration that she had only been piped by .02 of a second to gold by Turkey’s Nevin Yanit, who ran 12.63 seconds.

She now has her sights firmly set on bettering her time before next year’s World Championships and the 2012 Olympics. “I’d love to finish my career with the full set of medals” she said, “that would be unbelievable”.

Further details on the Sportswoman of the Year Awards can be found on the Irish Times website.