At least the future is bright for some of us

ATHLETICS: Has Ireland’s Fastest Woman lost the run of herself?

I WAS having coffee on Wednesday with Ireland’s Fastest Woman – not that anyone around us could have guessed who she was. We’d agreed to meet in Starbucks, in that fancy CHQ building in the heart of the IFSC, if only because it’s close to where she works, at A&L Goodbody, just down on North Wall Quay.

It was crowded as hell, and all the comfy chairs were taken. So we sat more or less right next to the cashier, who appeared to be doing a roaring trade in Gingerbread Lattes and Peppermint Mochas. (Ireland’s Fastest Woman ordered a Green Tea, and I went for a Regular Cappuccino).

“It’s busy now,” she told me, “but come back in half an hour and it’ll be dead. And there’s no one here on weekends. I don’t how much longer this place will survive. Sure, look around. Half the units are empty.”

It was my first time inside the CHQ building, and there was a sort of defiant buzz about the place as the cream of Ireland’s corporate financiers – or whatever’s left of them – soaked up the freedom of their lunch break before ducking back inside their office cubicles and the reality of this hideously dark hole we’ve dug for ourselves. Although if Starbucks are still with us maybe there is some hope.

There were a couple of reasons for meeting: last Saturday, Ireland’s Fastest Woman won the Inspirational Performance of the Year at the National Athletics Awards, and I knew there was a good story behind that; and there was also the rumour she was about to leave her relatively secure and well-paid job in the corporate tax business to go full-time into sprinting. Which is perfectly admirable, except she’s just turned 27, has no grant, no sponsor and no guarantee of getting her job back.

Had Ireland’s Fastest Woman lost the run of herself?

“It’s just not the kind of work you can combine with athletics,” she says, clearly convinced now that taxing jobs and taking training are incompatible. “The last few weeks I’ve missed two or even three training sessions a week because of work. Even missing one session is a problem. And I’ve been in the office sometimes until midnight, getting work done.

“When people think about the sacrifices you make for athletics they think you can’t go out, have a drink. That’s really the least of your worries. It’s mostly about work.

“People don’t realise it’s not just about fitting in the training. It’s about getting the proper recovery. Doing the weights. All the little add-ons. The circuit training, the core work, the stretching. You need to give all that the proper time. Because they’re all the things that really make the difference.

“So the plan is to take two years off, hopefully a leave of absence, which takes me through to the London Olympics.”

(Sorry, have I introduced you to Ailis McSweeney? The Cork athlete, who last July finally took the title of Ireland’s Fastest Woman, which had belonged, for 32 years, to Michelle Carroll? Indeed, before she lowered the 100 metres record to 11.40 seconds – eclipsing the 11.43 Carroll ran in 1978 – McSweeney was better known as Derval O’Rourke’s training partner, and occasional member of the Irish sprint relay team. Suddenly, after five years of trying, her talent was untapped and her motivation for the future is stronger than ever.) 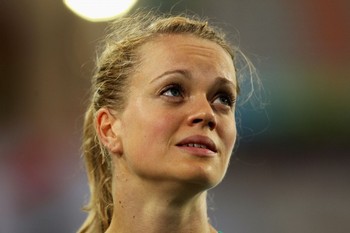 “When I started back in work after the summer I just knew, straightaway, that it wasn’t going to be possible to do both. I’d had time off after qualifying as a solicitor, but I’m used to being very focused on one thing. I couldn’t believe I was back in the situation of trying to divide my attention, but knowing I wasn’t doing both as perfectly as I should. I managed to do it as a trainee solicitor, although it was a little bit easier then.

“But I came back to work thinking ‘this is not going to work’. So it came down to a choice, work or athletics. And really, there was no way I was going to give up the athletics. Not when I’ve given it so much for the last seven years, and finally made the bit of progress.”

What helped swing the decision was the promise of some funding from Athletics Ireland and the Irish Sports Council, and some assurance from her coaches, Seán and Terri Cahill, that the best was yet to come. In fact, coming into the summer her 100 metres best was only 11.59 seconds, set back in 2005, the same year she won silver at the World Student Games in Izmir, Turkey.

In fairness, she’s been studying hard in the years since, completing a Masters in Law at DCU, while training to be solicitor. But after running 11.40, and backing it up with a strong performance at the European Championships in Barcelona – missing the final by .01 seconds – McSweeney was seized with thoughts of running even faster.

“It had been so depressing, repeatedly entering my PB from three or four years ago. When I came to Dublin first I just didn’t make the right decisions about training. I’ve been with the Cahills for the last three winters now, and training with Derval as well, but it took that long to get things right. When you’ve gone as bad as I did, it takes a while to turn it around.

“With work as well, sometimes I’d end up training on my own, because it wasn’t fair to have the others waiting around until 8.0, until I’d finished work.”

At 27 she’s not young by sprinting standards, although she is young in spirit. McSweeney came to athletics late, at 16, and never won an underage or schools’ title. Her sister first showed promise in various sports around Carrigtwohill, where they grew up, while McSweeney preferred to sit in the car, reading a book. Her first sporting interest was Gaelic Games (and still is, as some Dublin footballers will know) – but Leevale’s long-serving coach, John Sheehan, eventually saw her potential, and the rest is Irish women’s sprinting history

“It’s so exciting now, the future. And I’m just so glad I didn’t finish my career on 11.59. I feel a whole new stage is about to begin, that my career is only taking off.

“But I have to say Goodbody’s have been very, very understanding. I know it’s a big ask, taking off work, in the current environment. But it’s all about the running for the next two years. I’ll do it on a shoestring, and just hope it all works out.”

In some ways it already has: McSweeney texted me yesterday to say A&L Goodbody had agreed to the leave of absence, until after the London Olympics in 2012 – assuming there is still a job market there after the IMF have their say.

Of course none of us have any guarantees about the future anymore, except that Ireland’s Fastest Woman looks set to go even faster.