Many of Leevale’s top athletes were in action this weekend. While the Cork City Sports was the main event at home, Edmond O’Halloran went to the U20 invitational meet at Mannheim for some much-needed competition. He was rewarded for his travels with a new PB of 14.52, finishing in 5th place. With more regular top-class competition like this, there’s no doubt that Ed’s times would improve further. 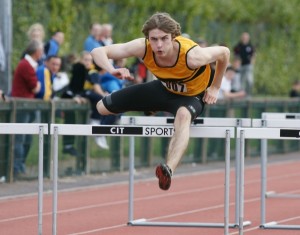 Also in Mannheim, Patrick Maher posted a time 52.29 seconds to finish third in his heat of the 400m hurdles. This was just outside the national junior record of 52.14 that he set at the Leevale open sports in April. Since then Patrick has been consistently under 53 seconds. See Patrick in action in Mannheim below.

The Cork City Sports were held on Saturday for the first time at the revamped CIT stadium, complete with new stand, timing facilities and reoriented track. The standard of competition was more than worthy of the new facilities, the fields in many of the events stacked with world-class athletes, particularly in the sprints. Times were slowed somewhat, however, by a very strong headwind in the home straight.

Leevale’s Derval O’Rourke didn’t put a foot wrong in the women’s 100m hurdles, and yet had to settle for 3rd in 13.40 behind Canadian World Championships silver medallist Priscilla Lopes-Schliep. The race was run into a wind of -4.5 m/s.

In the women’s 100m A race, Ailis McSweeney finished 2nd behind Jamaica’s Sheri-Ann Brooks, recording a time of 11.84, which was impressive in the windy conditions. David Quilligan was another in action, this time in the men’s long jump, where he finished 6th, with a best of 7.12 in a legal tailwind of +1.9 m/s.

David Killeen had a step up in competition in the men’s 100m B race, finishing 4th in 11.57. In the men’s 1500m, Mark Hanrahan found the going tough, but finished a respectable 12th in 3:54. On a tough day for distance running as well as sprinting, Thomas Maunsell had a decent run in the men’s 3000m finishing 20th in 8:51, a time a little outside his best.

Canadian athlete, Paul Rupprecht, is a recent Leevale signing, and he started his Leevale career in style with a massive win in the development men’s 1500m, his winning time of 3:54 more worthy of a place in the A race. Paul is a cousin of Leevale’s Barry Donovan. In the same race, Graham O’Riordan showed some of his 800m speed, running a strong last lap to finish 8th.

The race of the day was the men’s 200m, where thousandths of a second separated Paul Hession and Brendan Christian at the end, the Athenry man losing out by the narrowest of margins on a photo-finish. There were also outstanding performances from West Waterford pair Jamie Costin and Kate Veale in the 3000m walk. Costin broke Robert Heffernan’s Irish record, set at the same meet last year, and Kate Veale was all of 47 seconds faster than the old junior record and is surely a fantastic prospect for the future.