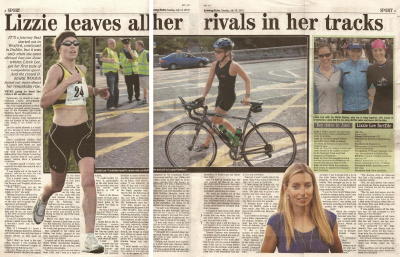 IT’S a journey that started out in Wexford, continued in Dublin, but it was only when she went abroad that our June winner, Lizzie Lee, got her first taste of competitive sport. And she craved it. MARK WOODS found out more about her remarkable rise.

WE’RE going to bend the rules a bit on this one.

Technically, we should be really confining Lizzie’s jaw-dropping achievements to last month.

But, that would prevent us from recalling her gold medal performance in the European Age Group Triathlon Sprint Championships in Athlone at the start of July.

And anyway, what transpired in June led directly to her historic podium finish in the middle of Ireland.

And the sprint element is a touch off, too, because it ‘only’ involved a 750m swim in the Shannon, followed by a 20km bike ride and a 5km road run.

That’s considered chicken feed compared to other greater distances, but Lizzie’s been there, too, and more than survived. She prospered.

Yet, the 30-year-old IT Project Manager with Core International in Ballincollig (‘don’t forget to mention them because they’ve been great’) doesn’t believe she’s a ‘genuine’ triathlete.

“I consider myself a runner, who can bluff the other two and pull out a good triathlon.

“I was eighth out of the water in Athlone, 14th off the bike, but ran them down. That’s what I mean.

“I’m a runner. Later, I might do one or two of the small Cork events, like Fermoy and Youghal, which are lovely triathlons.

“Still, you could not do the I Europeans held in Ireland. It’s as simple as that,” she said:

Taking the gun in Athlone was in her season’s plans, provided Lizzie could do herself justice on the day and to gauge that she had to test herself.

Cue the Fastnet Triathlon in Schull, 750m swim, 23km bike and 5k run, on June 12, her first in a year since returning from Oz.

“I said if I finished three minutes behind Joyce Wolfe I wouldn’t enter for the Europeans.

“But, if I managed it I knew I wouldn’t disgrace myself in Athlone and in the end I was only less than a minute behind, so that made up mind.

“And I didn’t go hard in the run either, because I was running for Leevale in the National League in Tullamore the following day.”

Ah yes! Those of us who think Triathlon gorgers can be a bit tapped in the head at times feed on this kind of stuff. That’s because after her swim, her stint on the bike and the run, Lizzie fell into bed around 8.30pm that evening ready to run for her club the following day, half-way up the country! She tucked up, more than contented with her second-placed finish in Schull and boosted by finishing so close to one of the country’s finest.

There was little time to dwell, though, because Lizzie was on the bus the following morning at 8am, ready to do her bit for Leevale…on the track, new ground in her career.

She competed in the 1,500m and 3,000m, but hadn’t planned to run both, especially as Lizzie had never run a mile race before!

A quick call to her revered coach, Donie Walsh, mentioning Siobhan Doherty’s name in the process, and the advice was simple.

“I could hardly believe it, particularly as the only track race I’d run before that was the Leevale Open Sports at CIT in May.”

Back on the blower again to Donie and a ‘will I or won’t I’ chat about going in the 3,000m less than an hour later.

“At first I was saying ‘no’. Then, I started feeling a bit better, so we said we’d give it a try.”

Linda Byrne, the international runner, was the favourite and with Siobhan also in the line-up, Lizzie had her work cut out, especially as the other pair went off hard. Linda duly crossed the line first, but the Leevale athlete caught and overtook Siobhan to come second in 10.10.11. Another great performance in a hectic 24 hours. And there’s more to come! “I was definitely knackered after all that and I took Monday off work, but was out running again in the highly popular John Buckley Sports 5km the following night.

Needless to say Lizzie splintered the rest with a blistering opening mile and while she couldn’t sustain the break-neck pace her winning 17.07 time, meant she had over half-a-minute to spare at the tape.

Her thoughts then turned to another triathlon in Dunmore East the following Saturday, looking for confirmation of her form, though none was required, as the result showed.

“I fixed the mistakes I made in Schull, like things in transition, the way I fixed my shoes and not taking on gell. You’ve got to be very prepared for a triathlon because the minute things can cost you 10 seconds.

“I went harder on the bike this time and it all felt better. I suppose my confidence was high, too.”

So, in the space of a week, Lizzie competed in two triathlons, finishing second and first, ran 1,500m and 3,000m races in less than an hour, again coming first and second respectively, and won a high-powered 5km road race into the bargain.

Some June! And that doesn’t include the Cork City Marathon on the Bank Holiday Monday, when she ran for Leevale in the relay in the company of Carmel Parnell and Nollaig Hunter. “I ran the last two legs of the marathon, 9.8 miles, in 59 minutes on a horrible windy day.

“I caught Lucy Brennan, who was winning the race outright, and ran with her for a minute or so, telling she was going to win and how great she was doing and to ignore me, because I was involved in the relay.

“It was only when I went by her and out of the protection of the lead car that the wind almost drove me back, it was so fierce.

“I thought for a second about going back behind the car, but I had told Lucy I was going on, so I couldn’t go back.

“Nollaig and Carmel were fantastic. A club mate was injured, that’s why there were only three of us.

“It was a groat thrill and sure the first girl across the line in the Cork Marathon, it doesn’t get any better than that.”

And it’s hard to imagine that she only started out five or six years ago, more out of boredom than anything else. “I was on my own in Wexford, working as a consultant with Accenture, and living in a hotel.

“We used get booted out of the building at 7pm and suddenly I was left to my own devices in the evenings. Accenture send a team to compete in their own Chicago Triathlon to help raise funds for Crumlin Children’s Hospital.

“A friend of mine from Cork, Matt Coughlan, urged me to get involved, saying you can swim, you can run and your dad is a cyclist, so he’ll sort you out with a bike.

“So, that’s what I did for three or four months of the summer and it all paid off because I was the first Irish woman across the line in America.

“Eamon Coghlan was presenting the prizes and he pulled me aside afterwards and said ‘you can run.’

“I got addicted to the track after that. It was only my second triathlon ever. I did one in Co Down before that. It was the Olympic style triathlon, 1.5km swim, 40km cycle and 10km run. I still remember that day as if it was yesterday.

“And yet I wasn’t really into it, because I didn’t buy a fancy wet-suit or bike until I went to Australia.

“I was living in Dublin for six years and wanted to get back to Cork, but I also wanted to try Australia. The plan was to go for a few months and then come home.

“I got a very good job with Coca-Cola in Sydney and decided to stay there an extra few months.

“I trained there with a club called the BRATS, under a brilliant coach, John Hill, the fastest man in the world over 50 in the triathlon.

“I did a huge amount of work with the bike, doing about 200 miles a week.

“And because of all the other work I was undertaking, as well, I managed to tone up, getting fitter and stronger. I was training with a lot of the Irish blokes, fellows like Paul Doherty, the Irish iron-man record holder. They brought me on in the three disciplines and I was delighted with it all, especially as I was winning medals and the like.

“I won the New South Wales state triathlon championship, which was a massive deal for an Irish girl.

“I was really into it by now, watching what I was eating and drinking, training very hard and getting the right amount of sleep.”

When she eventually came home in June last year, Lizzie immediately got in touch with Donie Walsh at Leevale.

“I ran my first race in Kinsale. Nobody knew me.

“I remember Mary Sweeney coming up to me and saying ‘who are you?'”

“The Evening Echo the following day had a big headline about this surprise winner.

“But, the only person who wasn’t surprised was Donie, because he had been coaching me for the previous three weeks.

“The big goal last season was the half-ironman triathlon in Kenmare which were the national championships, as well. I was third in that, 1.8km swim (30 mins), 80km bike up the Healy Pass and Moll’s Gap, and then a half-marathon.

“I was eighth coming off the bike, but ran 1.27 and managed to pull them in. I was thrilled.”

Lizzie’s appreciative of all those who’ve helped her along the way, like her dad, Garry, aka her manager, and Donie Walsh of course.

“I’m sponsored by the Edge (thanks Tony and Simon) and the gear they’ve given me has been a huge help, like the carbon fibre bike, the pointed helmet.”

Her friends call her Cinderella, because she’s always home before midnight and drinks water for the night.

The sacrifices are all worthwhile, because Lizzie has most definitely made it to the Ball!