This story appeared in the printed version of the Irish Times, Saturday, August 27, 2011, and online.

ATHLETICS: Her record in the so-called majors makes impressive reading, but can Derval O’Rourke produce the goods again in Daegu? IAN O’RIORDAN reports 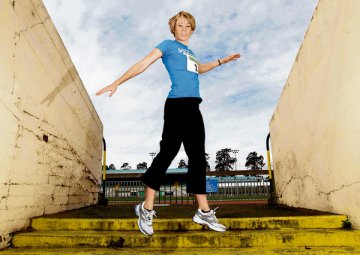 ‘Look, if you had one shot, or one opportunity to seize everything you ever wanted in one moment. Would you capture it or just let it slip?’ – Eminem’s Lose Yourself

IT USED to be the most frequently played track on her iPod, and might still be, but anyway, here we go again – Derval O’Rourke looking to seize everything she ever wanted in one moment.

It feels a little unfair to be talking up the same athlete as our main medal hope every time a championships rolls around, but that’s what happens when you’ve medalled in two of your last four so-called “majors” – and finished fourth in the other two.

Plus it’s not like we haven’t had some practice: for years Sonia O’Sullivan carried the mantle, and then, as if on cue, up stepped O’Rourke. Just like O’Sullivan the expectations are inevitably and justifiably high, and O’Rourke has rarely disappointed.

Think Moscow and Gothenburg, Berlin and Barcelona, and now Daegu. Think go, go, go! Indeed O’Rourke has now claimed four of the last six medals that Ireland has won in senior athletics championships – and when it comes to peaking when it truly counts, no Irish athlete has done it better, and more consistently, than O’Rourke.

“Well it’s nice to think that,” she says, “but at the same time I’m never comfortable with it. It means I’m very tetchy coming into these championships, knowing I have to fight all the way. It’s not like just showing up and flicking a switch. I don’t fear anyone, but at the same time I respect them, the same way I think they respect me.”

The only problem with having a great championship record in athletics is that the longer you extend it the more difficult it becomes. O’Rourke turned 30 at the start of the summer, which isn’t exactly ancient by sprint hurdling standards, yet it means she’s probably in or around her peak. She improved her Irish record to 12.67 seconds when finishing fourth at the World Championships in Berlin two years ago, before bettering that again to 12.65 to win the silver medal at the European Championships in Barcelona last summer. Now, Daegu may well prove exactly where she is; still capable of mixing it with the very best 100 metres hurdlers in the world, or else perhaps a little past her best.

Not for the first time her form coming into these World Championships is a little questionable, but in some ways that’s all part of the process. “Yeah, it would be unlike me to get everything right during the season, coming into a major championship, but it does mean I have to work very, very hard, in every session, coming into this. And you know I’ve never actually run quick in Asia? I didn’t run well in Osaka in 2007, and didn’t run well in Beijing either. That’s another reason why I’m far from comfortable,” says O’Rourke.

“But this year has been different in that I haven’t had any major injury problems, like I did last year, or even been a little sick, like 2009. Between indoors and outdoors everything has gone the way I’d hope, although it has been frustrating that I haven’t been running as well in races as I have in training. But at the same time I know it’s all about Daegu, and running well here.

“Because there is still so much more I want to achieve. I want to run faster that 12.65, and fourth in the last World Championships was still fourth. But I know my biggest challenge will be getting into the final.

“I’ve been there before, and need to be there again. It’s so important to me. Then, when you’re in there, the hunger is what matters. But I wouldn’t be here unless I thought I could make the final. I don’t like long flights, for a start.”

If O’Rourke’s championship record isn’t impressive enough, consider her championship longevity: spring hurdling is notoriously demanding on the body, and there’ll be several high-profile absentees from Daegu – including two of the three medallists from Berlin two years ago (Canada’s Priscilla Lopes-Schliep and Jamaica’s Dolloreen Ennis-London) and two of the three medallists from the European Indoors in Paris earlier this year (Germany’s Carolin Nytra and Norway’s Christina Vukicevic), where O’Rourke finished fourth.

The typically fancied American Lolo Jones didn’t even make her team – and then there’s the strangely poor form of the Turkish athlete Nevin Yanit, who beat O’Rourke to the European title last summer (although the less said about that the better).

At the same time, Australia’s Sally Pearson – who finished one place behind O’Rourke in Berlin – has emerged as the red-hot favourite: she’s run 12.48 this summer, unbeaten all year, and at age 25 is still approaching her peak. Not that the Americans Danielle Carruthers and Kellie Wells will be thinking Pearson can’t be beaten.

“You have six very good girls there,” says O’Rourke, “all capable of 12.5, then another six who could make the final. Hopefully myself included. I sometimes look at times, analyse them, but you can’t get hung up on them either. It’s one of those events where everyone knows each other very well, and no one will really surprise anyone else.”

O’Rourke does have a few things in her favour, not just her vast experience: last month she ran 12.84, in Switzerland, which was actually her fastest time ever outside of a major championship – with the bonus of being under the A-standard for next year’s London Olympics.

“Yeah, and some people laughed when I told them that, because it’s so much slower than my championship best. Conditions were perfect. No wind, hot track. And you don’t get many days like that. It’s also given me a massive awareness of how hard it is to run 12.6. I know how fast that felt, and that I have to work for every inch of it, and if anything at all goes wrong in Daegu then I won’t run 12.6. I know I’m capable of it, but it’s so far from a foregone conclusion that I’m going to go out and run another PB.”

There is one additional challenge facing O’Rourke in Daegu: her 100m hurdles heats are scheduled for next Friday at 10.20am – which is of course 2.20am Irish time. She’s worked out her own schedule of adjustment and deliberately didn’t fly out to Daegu until last Wednesday, yet realises it will all feel somewhat alien.

“There are some things I just won’t prepare for, like getting up to run at 2.20 in the morning. I also prefer to stay at home as long as possible, eat my own food, and play with my dog. But getting through the heats is already a danger, not knowing how the body will adjust, and how fast you can run at that hour. I’ll just have to deal with it on the morning, drink a big cup of coffee, and get over it.”