Ciarán Ó Lionáird has been in super form in recent weeks, finishing 1st and 2nd in 1500m races in the UK over the past two weekends. Tonight, at a meet in Belgium, he reached a completely new level, setting a new PB and achieving the A standard for the both the World Championships and 2012 London Olympics with a phenomenal 3:34.46. This is the fourth fastest time in history by an Irishman over 1500m and is an outstanding achievement. 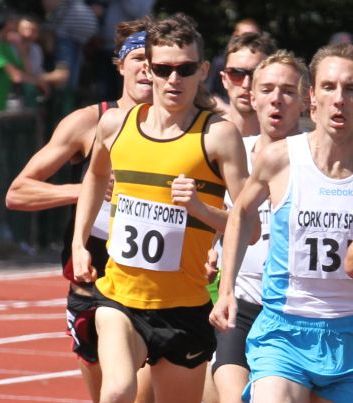 For the first time this season he was involved in a paced race that brought runners through 800m in 1:54, with several runners chasing the standard for the World Championships.

Not content to be dragged around to a fast time, Ciarán was involved in the race from the start but was just outpaced in the closing stages by Ethiopian Dawit Wolde who won in a time of 3:34.13, just ahead of Ó Lionáird who was second in 3:34.46. Canadian Nate Brannan, who was at Michigan University with the Leevale man, was third in 3:35.80.

Ciarán’s time represents a huge improvement on his previous best of 3:40.69 and follows on his fast times over 1 mile, 3000m, 5000m and 10000m so far this year. His time is inside the A standard for both the World Championships in Daegu and the London 2012 Olympics.

Ciarán will be returning to Ireland this weekend to compete at the National Seniors in Santry.