It is with deep sadness that we report the death of our esteemed colleague and friend, John Smyth, who passed away last Monday morning. John’s contribution to the club and to Irish athletics cannot be over-exaggerated. He was elected an honorary life vice president of the club in recognition for his years of service. John’s involvement in Leevale went back to the Hilltown Athletic and Cycling Club, one of the clubs from which Leevale was formed. The Hilltown Club was established in 1956 and John was there form the very beginning competing as a cyclist. However, even in his competitive days he showed an aptitude for the administration side of our sport, when he also acted as club secretary while competing.

After the formation of Leevale and over a 30 year period he spent most of his time as an administrator. He acted as both chairman and secretary for most of these years. In recent years he took a back seat from his club duties. However, he was always at hand to offer his advice and his years of experience. His calm manner and ability to size up the situation made him the ideal chairman. This ability was recognised at county and national level. He spent 10 years from 1995 to 2004 as chairman of the Cork County Athletic Board. From 1995 to 1999 he was chairman of the Cork BLÉ Board. In 1999/2000 BLÉ and NACAI were dissolved to form the Athletics Association of Ireland (Athletics Ireland). John played a vital role in these delicate negotiations and is credited with bringing them to a successful conclusion in Cork.

At national level he was on the National Track and Field committee for several years during the 90s and into the new millennium. John’s contribution to athletics did not stop at the office. At virtually every County, Munster and All-Ireland Championship at both track and cross country he could be seen there acting as an official with his great friend and fellow Leevale stalwart Joe O’Flynn.

John was renowned for his honesty and fairness. His calm manner and demeanour in handling awkward situations was infectious to those around him. At the recent National Indoor Championships in Belfast and the National Cross Country Championships in Dublin last Saturday, there were several enquiries about John from officials and athletes from all over the country, a true measure of the esteem in which he was held among the athletic community. Little did we know that a few days later he would pass on to his eternal reward.

The removal will be on Wednesday evening, 2 March, at 8 pm from Temple Hill funeral home to St. Michael’s Church, Blackrock. Requiem Mass Thursday at 11 am. Funeral afterwards to Kilfachtnabeg Cemetery, Glandore. 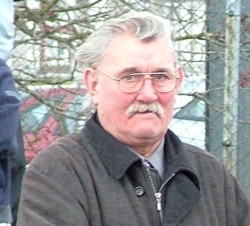