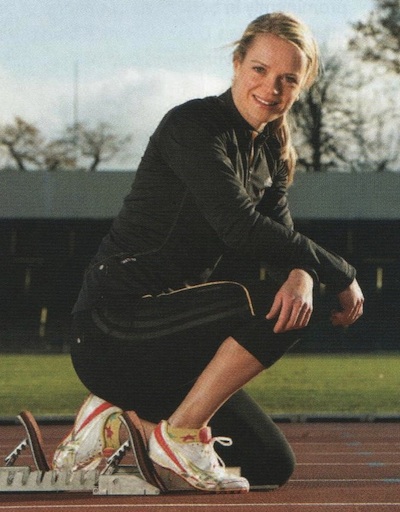 She dived over the finish line, glanced across at the clock, and straight away told herself not to believe it. 11.40 seconds? Nah, that clock has stopped early. Or it’ll be wind-assisted. It felt quick alright, but something… don’t cheer, don’t smile… wait… 11.40 seconds! Really? Irish record then. At last! But what about a drugs test?

Ailis McSweeney only recently discovered YouTube footage of the race at the Liege meeting in Belgium last July when she won the 100m in 11.40 seconds – breaking the longest standing record in Irish womens athletics. The existing mark of 11.43 seconds had stood since 1978, before she was even born, when Michelle Walsh – winner of some 28 Irish sprint titles – ran 11.43 seconds in Sittard, in Holland.

McSweeney was understandably cautious in allowing the time to register. After all, her 100m best coming into 2010 was 11.59, which she`d run way hack in 2005, and although she’d run 11.60 to win the national title just two days previously on July 1 1, had she really gone where so many of Irish women’s sprinters had failed to go in the past 32 years? Sprinters like Ciara Sheehy, Sarah Reilly, Emily Maher, Anna Boyle, Claire Brady.

“Really, all I was thinking about that night was the qualifying time for the European Championships,” she says. “So I was surprised, big time. Watch the video of it and you’ll see I don’t even look happy.

I won the race, but when the time came up on the Clock I just wasn’t sure if the clock was right, or the wind readings. Even when all that was okay I volunteered tor a drugs test, just in case it was needed to ratify the record for a drugs test. Only after all that it began to sink in.

“And I’d been trying to get into the race for a few days before. I checked again after the nationals and was told not a hope. Then they told me on the lunchtime on the Monday there was a lane free, so I got on a plane straight away.”

And the rest is Irish women’s sprint history – not just McSweeney breaking such a long-standing record, but also that at 27 she’d finally delivered on the potential first revealed some five years earlier, when she won the 100m silver medal at the World Student Games in Izmir, Turkey, along with a bronze in the 4x100m relay. She can almost laugh now about how slow her progress was, if only because she knows all the mistakes she’s made in the past will ultimately prove important lessons for the future.

“It was so depressing, entering my PB from three or four years ago. I know I was studying a lot too (completing a Masters Degree in Law at DCU, while training to be a solicitor) but the athletics just wasn’t clicking. I ran the World Student Games in 2005 and that was the last time I ran a PB in the 100 metres, or in any event! I ran the relay at the Europeans in 2006, and the World Indoors too, but there was no real improvement. When I came to Dublin first I just didn’t make the right decisions about training, but you can’t just give up and live on nothing when things are going badly.

“I was training with John Sheehan in Cork up to 2005, and ran all my PBs under him, but when I moved to Dublin I just let that slip. And when you’ve gone so bad it takes a while to turn it around.”

The turning point came three years ago when she joined up with Team Cahill – the small but elite training group, including Derval O’Rourke, guided by Sean and Terri Cahill. McSweeney knew O’Rourke since their early days back in Leevale, and although they come from different parts of Cork there was a natural bond there which has grown stronger over the years.

“I’ve been with the Cahills for the last three winters, and it took that long to get things right. But they’ve been the difference, and why I ran the 11.40. They work off target times, and you might be doing 85 per cent of it in a session or 90 per cent. And I was working off a target time of 11.30 seconds, even though my best was 11.60.

“And of course I’ve learnt so much from Derval as well. She always says people will remember you for running well at championships, not for times. She’s really rubbed off on me that way. If I’d broken the record and then blown it at the Europeans it wouldn’t have been worth a thing. I was disappointed not to make the final (she missed out by .01 of a second) but at least I was competitive. And I’m already thinking I don’t want to be in that position again. I was delighted to run well, but gutted not to make the final. I didn’t know whether to laugh or cry.

“But if we oould just bottle what Derval has and give it out to everyone. I remember the 2006 Europeans in Gothenburg. She ran her semi-iinal and just about got through. Then she comes back to the warm up track and says: ‘l’m pretty sure I can win’. I was saying to myself, ‘what is she on? There’s no way she can win.’ I actually thought she was nuts. But she just has that belief. And you always do the session harder when you’re with someone like Derval although it doesn’t actually feel harder. We like the small group too because we all want our own special attention.”

McSweeney was relatively late coming to athletics. She never won a schools or underage title, and has never been to Mosney. Growing up in Carrigtwohill in east Cork, she was always a little cut off from the sport, and when her parents would take her sister to various athletics meetings she would sit in the car reading a book. She played a lot of basketball and camogie, but John Sheehan, her secondary school coach, eventually persuaded her to come up to Leevale and after a year or so she was addicted.

She has become increasingly consumed by sprinting over the years, although it frustrates her sometimes to look at the record books and still see the 10.49 world 100m record belonging to the late Florence Griffith Joyner.

Now that she’s tasted some success after the lean years, McSweeney wants more, but she says it frustrates her how Irish athletes still seem to be worse off than most of their sporting counterparts: “It’s really depressing to think we won’t have an indoor stadium here in my running lifetime, not the way the economy has gone now. We do have a bit of heating now in Santry, which actually will be of some help. I ask anyone I know who plays Euro Millions to promise to build an indoor track if they win.

“But it’s amazing how many people are willing to help. Like I use the gym in DCU for free. And a gym in Midleton as well. I’ll be grateful for what support Athletics Ireland gives, but it’s all about the running for the next two years. I’ll do it on a shoestring, and just hope it all works out. It’s so exciting, really. I’m just so glad I didn’t finish my career on 11.59. I feel now a whole new stage is about to begin, that my career is only taking off.

Most of us would need a very good excuse for leaving relatively safe and well-paid employment these days – and some people might even argue that going full-time into sprinting to pursue Olympic aspirations for London 2012 is not a good excuse. But when it came down to it, Ailis McSweeney didn’t have to think too long about taking leave of absence from A&L Croodbody in the heart of Dublin’s IFSC, where she was working as a tax solicitor.

She’d applied for a leave of absence, although truth is she was going to leave no matter what. Goodbody also had the good sense to back her decision and grant the leave of absence until after the London Olympics in 2012 (assuming there is still any work in the country at that stage).

“It’s just not the kind of work you can combine with athletics,” she says, clearly convinced that taxing jobs and taxing training are incompatible. “In recent weeks I’ve missed two or even three training sessions a week because of work. Even missing one session is a problem. And I’ve been in the office sometimes until midnight, getting work done.

“When people think about the sacrifices you make for athletics they think you can’t go out, have a drink That’s really the least of your worries. It’s mostly about work. People don’t realise it’s not just about fitting in the training. It’s about getting the proper recovery. Doing the weights. All the little add-ons. The circuit training, the core work, the stretching. You need to give all that the proper time. And of course you need the time to go warm-weather training. Because they’re all the things that really make the difference”

What helped swing the decision was the promise of some funding from both Athletics Ireland and the Irish Sports Council, and some assurance from her coaches – Sean and Terri Cahill – that the best was yet to come.

“When I started back in work alter the summer I just knew straight away that it wasn’t going to be possible to do both. I’d had time off after qualifying as a solicitor, but I’m used to being very focused on one thing. I couldn’t believe I was back in the situation of trying to divide my attention, but knowing I wasn’t doing both as perfectly as should. I managed to do it as a trainee solicitor, although it was a little bit easier then.

“But I came back to work thinking ‘this is not going to work…’ So it came down to a choice, work or athletics. And really there was no way I was going to give up the athletics. Not when I’ve given it so much for the last seven years, and finally made the bit of progress.” 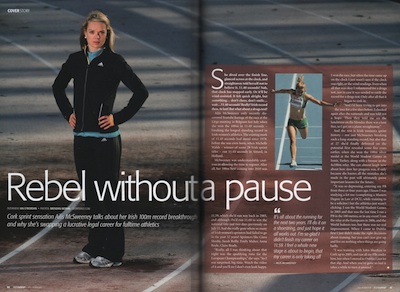 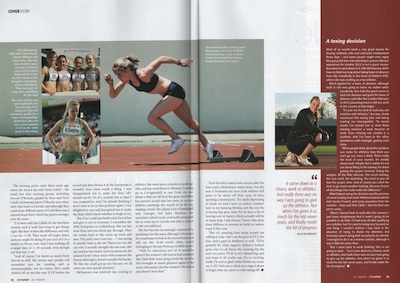