The following appeared in the print edition of the Evening Echo, Monday 19 March 2012.
By Deirdre O’Reilly

MAHER’S Sports Shop on Maylor Street was the venue for the launch of Leevale Athletic Club’s upcoming track and field meet.

One of the best known clubs in the country, Leevale’s meet is set to attract athletes from all over. The two-day event is the first one of the year and is proving to be very popular with senior and juvenile athletes, providing them with high level competition and an opportunity to post the first outdoor times of the year.

A number of athletes will also be hoping to achieve international qualifying standards over the two days. The launch was attended by many well known in the world of athletics. Lord Mayor Cllr Terry Shannon attended the launch, as did one of Ireland’s most talented athletes, walker Robbie Heffernan.

Pat Buckley, chairman of the Cork County Board, was also there, as was Steven Macklin, regional development officer with the Athletic Association of Ireland (AAI).

Following the showing of a promotional video about Leevale AC, a number of speeches were delivered. These included chairman Liam Horgan, Marguerite Maher of Maher’s Sports, Dr Éamonn Cashell of CIT and Liam Hennessy, president AAI. Each speaker stressed the importance of having a national and international-standard meet in Cork. Star attraction on the night was Ciarán Ó Lionáird who is just home from the World Indoor Championships in Turkey. Ciaran stressed the importance of children starting off in athletics trying sprints, jumps and distance events. The Leevale Track and Field meet takes place at CIT on the weekend of April 14 and 15. 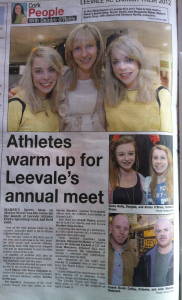 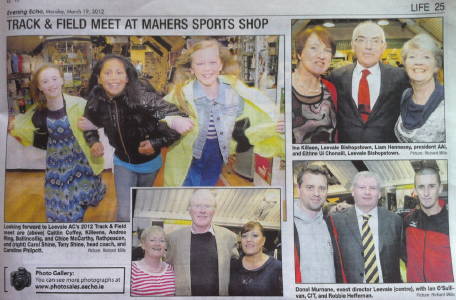