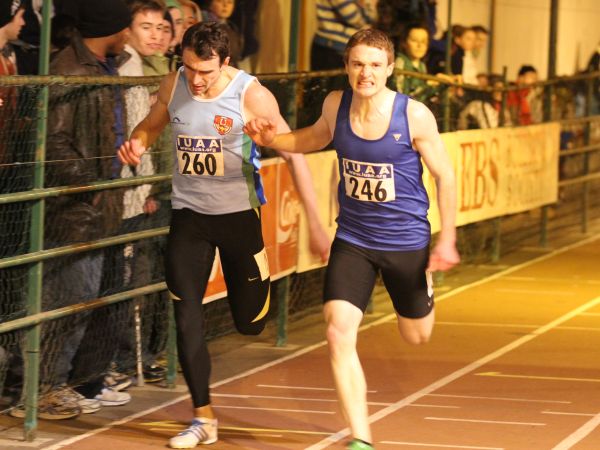 The IUAA Indoor Championships were held as a single-day event in Nenagh last Saturday and there was success for many of the Leevale athletes who were representing their colleges, particularly in the sprint and field events.

David Killeen had a great win in the 200m while Denis Finnegan set an IUAA record in winning the triple jump. Edmond O’Halloran won the 60mH and did well in the 60m flat also where both he and David Killeen made the final, finishing 6th and 5th respectively in a top-quality race

In the field events, David Tierney won the 16 kg for distance by a country mile and David Quilligan took silver in the long jump.

Andrea Bickerdike is coming back into form recently, and took 3rd in the 400m, while Katey Byrd was 4th in the 60mH.

The UCC 4x200m relay team had no fewer than 3 Leevale athletes on the team – Dan Ahern, Edmond O’Halloran and Thomas O’Sullivan – but had to settle for 2nd behind UL, who were helped in no small measure by Leevale import David Killeen.