This story appeared in the printed version of the Irish Examiner, Thursday, December 29, 2011, and online. 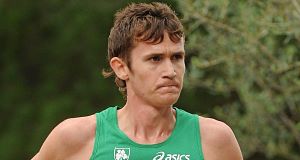 CIARÁN Ó LIONÁIRD is among the Irish athletes with preliminary entries for the world indoor championships in Istanbul in March and the Corkman, who turned in a series of stunning outdoor performances last season, is ready to answer the call if things go to plan.

The Leevale man’s US collegiate career was fragmented by illness and injury but it took on a new dimension after a final-year switch to Florida State.

He still struggled with his confidence but that, too, was about to change. He had hammered at 3:40 for 1500m until he lined up for an attempt at the Olympic qualifying standard in the Belgian town of Oordegem.

What was originally a low key event turned into a sensational race with Ó Lionáird running the fourth fastest time ever by an Irishman at 3:34.46 — knocking almost six seconds off his previous best time and posting his A standard for both the world championships and the Olympic Games.

And he maintained his form in Daegu, where he ran 3:36.96 in the semi-finals and 3:37.81 in the final where he fell victim to a sensational 51-second final lap that saw Asbel Kiprop become the first Kenyan to win the world 1500m title.

Ó Lionáird immediately set his sights on London 2012. He was signed up by Nike, joined Alberto Salazar’s group of elite athletes in Portland alongside the newly crowned world 5,000m champion, Mo Farah, and began his Olympic build-up.

“Everything is great here in Beaverton,” he said yesterday. “I spent Christmas at Nike WHQ, staying in the routine. We are in the middle of a hard training block here so I didn’t want to disrupt it.”

He is revelling in the training regime without getting carried away by his enthusiasm — something that has been a problem in the past.

“Training is going really well,” he said. “I have some very talented teammates who push me every day in sessions and a coaching staff that makes sure I have the right amount of work. Being able to learn from Mo and Galen [Rupp] and Dathan [Ritzenhein] has been great as they’ve been competing at the top for quite a few years.

“Alberto Salazar, Steve Magness [his assistant who is a physiology expert] and our sports psychologist Darren Treasure are watching every session to make sure I’m working optimally physically and mentally. It’s a great team to have behind me.”

And it does not end there. The shoe developers at Nike put him in the best products and customise his shoes so as to limit the risk of injury.

“We had to change a lot of things when I arrived,” he said. “Alberto is changing my arm carriage and posture and also I am spending a lot of work in the gym fixing the imbalances that caused all the injuries when I went to college. We’re making great progress and I’m feeling no aches or pains anywhere. Having the great facilities like an underwater treadmill here is great as I can reduce impact, too, and further limit injury risk.

“The main goal of the year is obviously London and getting a medal there but we’re going to use the indoors as a good way to gain more experience with tactics. If the first few races go well, then we’ll give the world indoors a lash hopefully.”