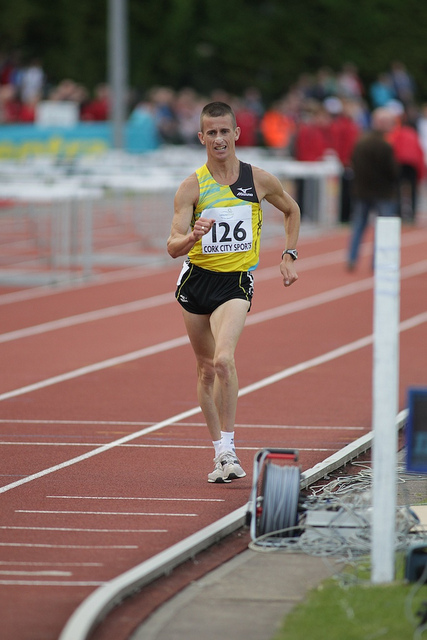 The 62nd instalment of the annual Cork City Sports was held at the CIT arena last night and the meet lived up to all expectations. There were some top-quality races and great times posted in spite of the cool conditions.

Highlight of the evening was the world masters record and Irish senior record posted by Togher’s Rob Heffernan in the 3K walk. Rob had the crowd behind him all the way as he posted 11:11.94. Add in an Irish senior record for Thomas Barr (Ferrybank) in the 400mH, a junior record for Sarah Lavin (Emerald) in the 100mH and great races in the men’s mile and women’s 800m, there was plenty of excitement to keep the large crowd entertained throughout.

A number of Leevale athletes also competed on the night. Clare McSweeney went in the women’s 800m and had a good run to finish 7th in 2:07.71. James Grufferty ran a gutsy race in the men’s 3K and wasn’t overawed by the quality of the competition, finishing 12th in 8:33. Thomas Maunsell was another who was new to this level of competition and finished 17th in the same race. David Quilligan finished 5th in the long jump, 6.95 a little below his best. Things did not go so well for Ailis McSweeney in the 100m as she false-started and was disqualified.

Leevale had a number of competitors in the junior 1500m, Conor Walter the first home, 5th in 4:07. Carol Finn did a good job pacemaking in the 3K, while earlier in the evening there was a good turnout in the juvenile 300m gala, where many younger Leevale athletes competed.