Bryan wore number 39 on the start pontoon and stood alongside 67 men who had battled it out all season in the World Triathlon Series on their way to the prestigious Grand Final.

The swim got off to a fast start with swim specialist Richard Varga leading the charge. The Brownlee brothers were tucked in behind with Gomez in 13th place. By the end of the 1500 metres Bryan Keane was 1:24 off the leader and in need of a quick transition. He did just that and chased hard on the bike to make up the deficit.

Behind, Bryan was on a charge moving up from the 4th chase group to the 3rd and finally into the 2nd pack. They continued to claw back time as the kilometres clocked off and got within 25 seconds by the end of the 40km bike section.

Bryan’s group followed into transition 25 seconds behind the leaders and he flew through transition and onto the run to cheers from the hordes of Irish supporters. He was running well and cranked up the pace over the second half to pick off those fading ahead of him.

Bryan had a good run, clocking 31:09 for the 10 kilometres to finish 27th. The result also boosted his World Series ranking to 32nd and will give him great confidence for the 2014 season. 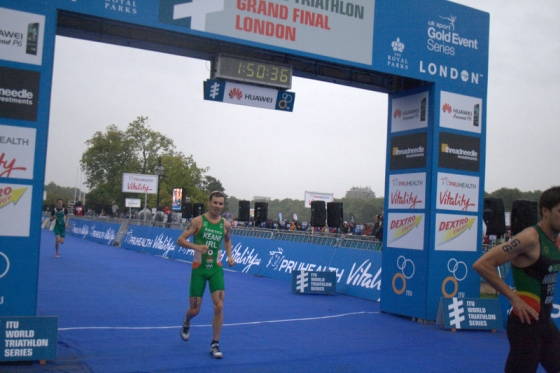