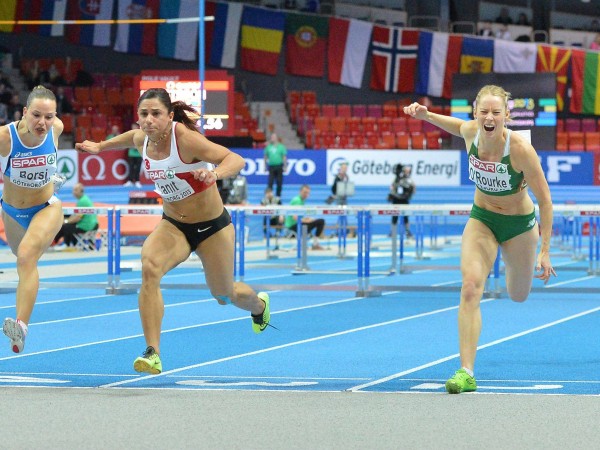 Derval O’Rourke finished an agonizing 0.01s off bronze in tonght’s final of the 60mH in Gothenburg. From the start she put it up to event favourite Nevin Yanit, matching the Turkish athlete stride for stride in the early part of the race. In the end she just got pipped on the line by Alina Talay (BLR) and Veronica Borsi (ITA), as Yanit held on to win. Once again Derval proved she is a championship runner as her time of 7.95 was yet another season’s best.

Derval O’Rourke was in action earlier this evening in the semis of the 60m hurdles. Once again, most of the medal contenders were in her heat. As in all her major championship races to date, Derval once again rose to the challenge and ran a great race, never outside the top four, and eventually finished 4th in a tight finish. This comfortably qualifies her for the final. Her time of 8.00 was another season’s best. She goes into the final as 4th fastest qualifier of the 8. 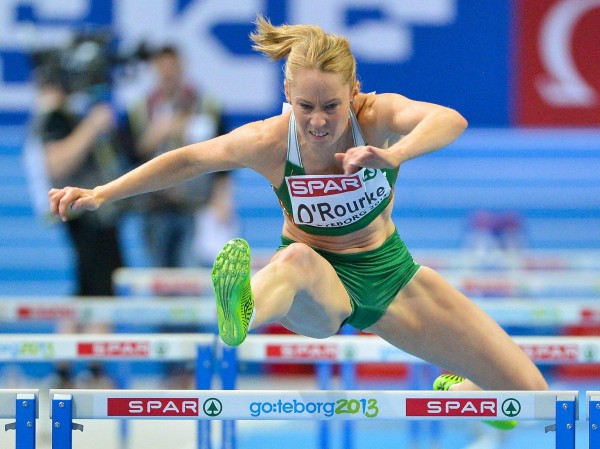 Earlier Derval O’Rourke comfortably qualified from the morning’s heats of the 60m hurdles. Running in the first heat she was up against two of the main medal contenders, Nevin Yanit of Turkey and Eline Berings from Belgium. She got a great start and, while she faded a little over the last few barriers, hung on to finish a great 2nd to make it through to the evening semis. Her time of 8.05 was the fourth fastest of the morning and a season’s best.

Listen to a post-race interview with Derval here.

Ciarán Ó Lionáird was also in action in the first of this morning’s heats of the 3K. He looked comfortable throughout sitting in fourth or fifth position. Into the last lap he let fly with a turn of pace that took him to the front and home as heat winner in 7:55. Ciarán will be in action again on Saturday evening in the final. 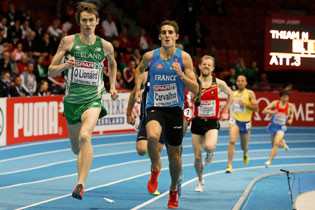 Listen to a post-race interview with Ciarán here.

It was a good morning session overall for the Irish athletes with Brian Gregan impressively winning his heat of the 400m.

The indoor championships are being streamed live at the following link.