The following appeared in the print edition of the Evening Echo, Thursday 17 January 2013.
By John Walshe

The Cork City Sports Athlete of the Month Awards for 2012 concluded last Friday as two athletes and an administrator of the sport were honoured at The River Lee Hotel.

Lizzie Lee is no stranger to awards at this stage and was a clear winner of the December honour on the back of a brilliant run at the European Cross-Country Championships in Budapest.

Finishing in 23rd position overall against the cream of European competition, the Leevale athlete was the vital fourth scoring member on the Irish team that won gold medals in the team contest. 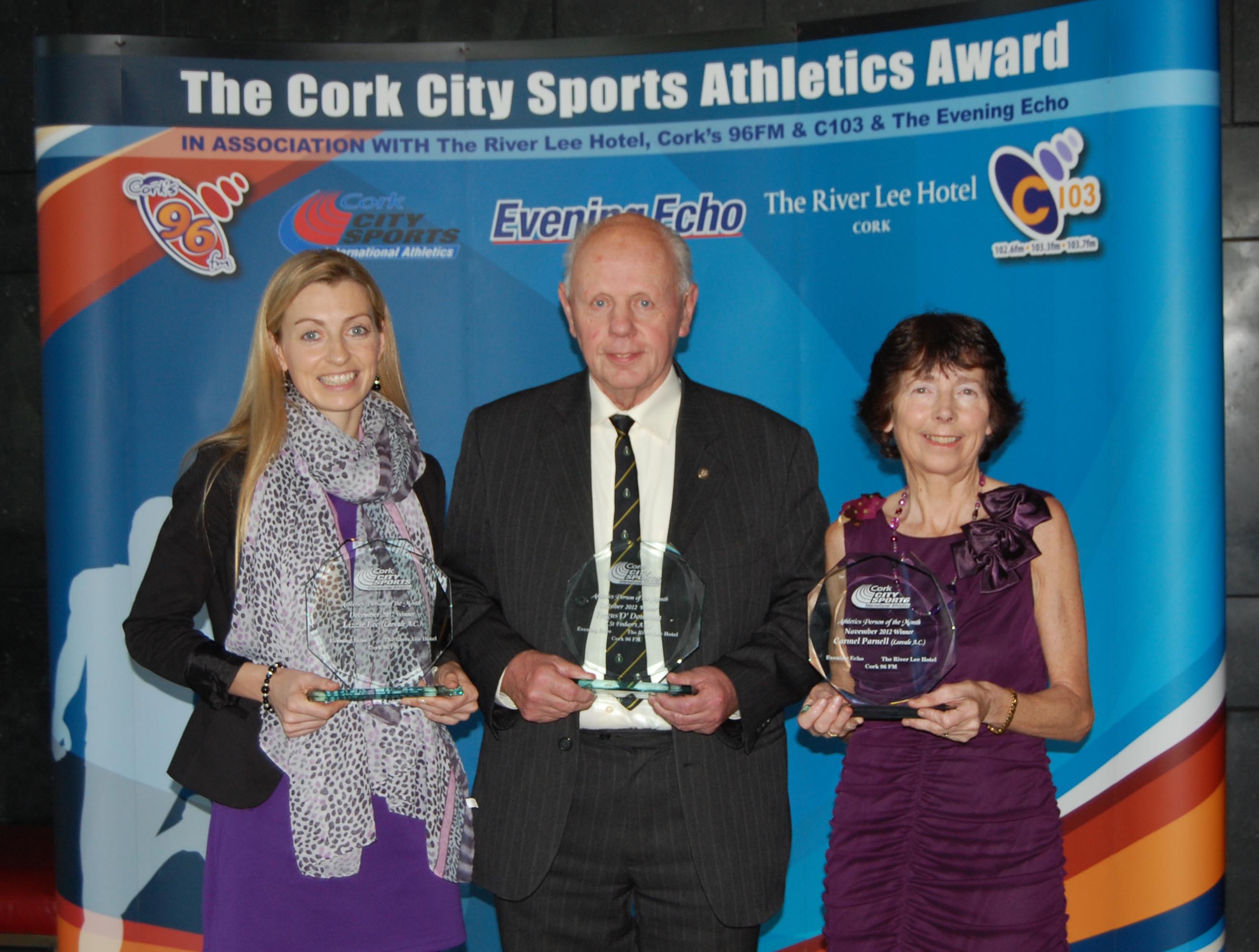 Just for good measure, Lizzie was second at the National Inter-Counties Championships in Meath at the end of November and of course also won the Evening Echo Mini-Marathon back in September.

Another member of the famous city club is Carmel Parnell and she was honoured for her individual victory in the over 55 section at the Masters Home Countries Cross-Country International held in Belfast in November. This was Carmel’s third year in a row winning this category having previously won the F50 age-group on a number of occasions.

The winner of gold and silver medals at the World Masters Track and Field Championships in San Sebastian, Spain, back in 2005, Carmel currently holds five Irish Masters records on the track and two on the road.

Her first race was the inaugural Cork Marathon back in 1982, which she completed with very little training in 3:45. The following year she joined Leevale where she met her husband, well-known athlete and coach Hugh Parnell, and she would go on to represent Ireland at senior level in cross-country.

This past year Carmel has also had a number of outright road race victories to her credit including the Eagle and Army/Navy five-mile events.

Fergus O’Donovan has given a lifetime of service to his beloved sport and in particular to track and field athletics. A former winner of the South Munster Schools one mile title, Fergus would go on finish third the same year behind the legendary Tom O’Riordan in the Munster Schools.

He later moved up to the marathon, running the distance on 11 occasions with a best time fractionally outside the three-hour mark.

The dedicated St Finbarr’s man also won a number of inter-varsity awards while attending UCC and one of his main achievements in the 1960s was the establishment of the ‘Bear’s Club’ Easter Coaching Course at Gormanstown College. For a number of years, this was the Mecca for Irish athletes with some of the leading coaching personalities in these islands attending.

A former secretary of the Cork City Sports Committee in the 1970s and now a respected middle distance coach with the ‘Barrs, Fergus received the October award for initiating and organising the very successful series of Track and Field League events that take place during the summer months.

Tony O’Connell, Chairman of the City Sports, congratulated all three winners on their achievements and also thanked the sponsors of the monthly awards, The River Lee Hotel, Evening Echo and 96F & C103FM.

As well as families and friends of the athletes, along with representatives of the sponsors, other Cork City Sports committee members present included Frank Walley, Dick Hodgins and Terry O’Rourke.