The following appeared in the Irish Examiner, Monday 4 March 2013.
By Feidhlim Kelly

Ciarán Ó Lionáird turned a “turbulent” 2012 into a composed bronze medal-winning performance on Saturday evening at the European Indoor championships in Gothenburg and now wants to make an impact on the world stage. 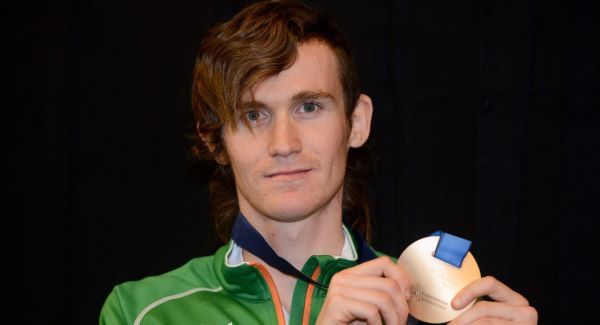 The Leevale athlete looked poised to strike for gold behind eventual winner Hayle Ibrahimov (7:49.74) of Azerbaijan at the bell but was pipped for silver by Juan Carlos Higuero of Spain, who ran 7:50.26.

“Honestly, I ran for gold and probably lost a silver in doing that,” said the Oregon-based runner. “I moved early and Higuero was very smart.

“No matter how fast you are it’s impossible to respond to a move in the last straightaway. And he ran for silver and good luck to him.”

Ó Lionáird was reasonably content with his run though his tactics failed to deliver the ultimate goal.

“If I ran for silver I wouldn’t have been able to get to sleep. I’d be thinking ‘I should have gone for gold’, ‘maybe I would have won gold.’ I tried to win gold and I didn’t get it and came away with bronze.”

The Macroom man had a difficult 2012 on and off the track, and has now settled in Eugene, Oregon and believes that all of the challenges have led to an improved athlete.

“I moved into the professional ranks last year. I moved groups – I moved to Alberto Salazar and then to Mark Rowland. It took me the year to put the people around me that I wanted to build to 2016.

“I needed time and it takes adjustment,” speaking of graduating from Florida State to being a full-time runner. “It was difficult results wise but I wouldn’t change it for the world.”

He now has his sights set on being part of a new Irish middle-distance generation that make an impact on the world stage and believes that his US base will help.

And he vowed: “Irish guys can compete on the world stage in middle and long distances. The US have proven that and in me and some of the other young athletes we have the chance to make an impact.”