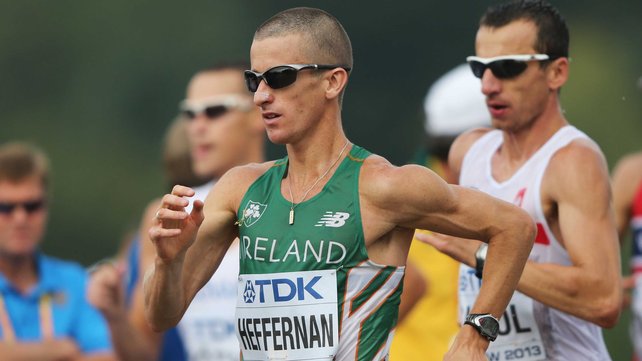 Congratulations to Rob Heffernan of Togher AC, who this morning became world champion in the 50K walk. Competing in the longest, toughest event of the championships in searingly hot conditions, Rob put the boot down in the last 10K to completely destroy the field. In the end he had over a minute to spare over the Russian athlete, Mikhail Ryzhov.

Of all the great achievements by Irish athletes at major championships, this is probably the most well deserved. Rob has been so close on so many occasions, including an agonising 4th at last year’s London Olympics.

Rob has done a huge amount for athletics in Cork over the years. Starting as a cross country and T&F runner on the local and national scene, he quickly found his niche as an international racewalker and has been ever present at major championships. Recently he has set up a walking squad based in Cork, coaching the likes of Brendan Boyce and our own Luke Hickey, and bringing in walkers from all over the country. He has been a loyal supporter of the Cork City Sports for many years, has competed at the Leevale T&F meet many times, and has always been willing to lend a hand to clubs from across the county. All supporters of athletics in Cork will no doubt be proud of their new world champion!

Brendan Boyce, who is coached by Rob, also put in a great performance, finishing a creditable 25th in a PB of 3:54.24.