It’s been all of 13 years since a Cork team last won the National Senior Inter-Counties Cross-Country Championship. In that period Dublin have won an amazing 11 successive titles and look set to continue that trend for the near future.

Things were different 40 years ago and this month marks a famous Rebel victory which took place at Mallow Racecourse on January 27, 1974. It was a day also notable for the conditions endured and the individual win by a man who is still very much involved in the local athletics scene here in Cork. 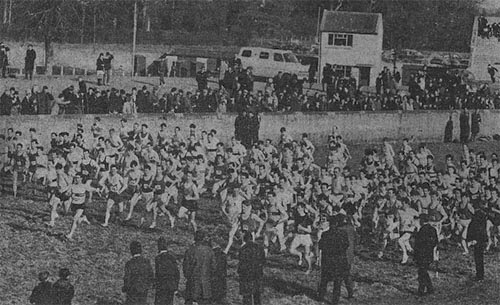 The weather during all of January 1974 was something akin to that experienced in recent weeks, with heavy rain and storms an almost daily occurrence. As competitors and spectators made their way to Mallow on that Sunday morning, the bright sunshine had given way to steady rain. As time moved on to the main attraction of the day, conditions continued to deteriorate.

Deirdre Foreman had led Dublin to an easy team win in the opening race which saw the Mellerick sisters from Fermoy – Maura and Dervla – finish fourth and fifth. As the 170-strong men’s field toed the line, they faced the prospect of seven-and-a-half miles of heavy and undulating terrain in torrential rain and gale-force winds.

On the second lap of five, Danny McDaid, Tom O’Riordan and Des McGann had prised open a slight gap on the large chasing group. Shortly after, they were joined by the ominous figure of Cork’s Donie Walsh.

Like McDaid and McGann, the Leevale man had run the Olympic marathon a year-and-a-half before though the streets of Munich and was now back living and working in his native city after a four-year scholarship at Villanova.

Passing the racecourse’s grandstand for the third time, Walsh took the lead and stayed in front for another mile, before McCann, running the race of his life, drew level. As conditions continued to worsen, the pair ran shoulder to shoulder until a surge by Walsh proved decisive, gaining him a vital 20 yards advantage.

McCann tried all he could to regain contact but the 26-year-old Corkman was not to be denied in front of his home crowd and eventually crossed the line with 13 seconds to spare over the gallant Meathman with O’Riordan, representing Kerry, just another five seconds back in third.

Every bit as exciting as the individual battle was the team contest and when the points were tallied up, Cork had come out victorious by seven points (89 to 96) over Galway with Dublin third on 174. The Cork scoring sextet were: Donie Walsh (1st), Richie Crowley (8th), Freddie Down (14th), Finnie Long (15th), Dick Hodgins (24th) and Denis Manning (27th).

As the victorious Cork team made their way home amidst the rising floodwaters around the town of Mallow, they were able to reflect on a famous victory achieved in the most appalling of conditions.

But for Donie Walsh, it marked the end of a remarkable month of January that had produced four brilliant achievements the likes of which wouldn’t even be contemplated nowadays by any of our full-time athletes.

On the first Saturday of the month, along with colleagues Tony Shine and Tim Donovan, Walsh had travelled by train to Belfast where he won the prestigious Miskimmon Cup cross-country over a very tough six-mile course.

The following day, he was back in Ballincollig for the Cork senior championship which, like all championships at the time, was over a distance of seven-and-a-half miles. A steady start saw Walsh back in 10th position in the early stages as clubmate Ray Treacy set a gruelling pace but after two miles Walsh – wearing his familiar headband – had opened up a gap on his nearest challenger, Richie Crowley of St Finbarr’s.

At the finish, the margin of 15 seconds was sufficient to give Walsh another title ahead of Crowley with Finnie Long holding off Treacy for third. Leevale easily took the team title on 41 points, 14 ahead of St Finbarr’s, with the scorers being Walsh (1st), Treacy (4th), Gene Mealy (5th), Dick Hodgins (8th), Jerry Murphy (9th) and Wally Young (14th).

Two weeks later, January 21, was the day of the Quinlan Cup road race at Tullamore. Road races today may revolve around times and accurate distances, but Tullamore was all about competition. Winners over the years would read like a who’s-who of Irish running with the likes of Eamon Coghlan, John Treacy, Ray Treacy and John Hartnett tasting victory around the streets of the Midland town.

For once in that month, conditions were good as the huge field of around 400 headed off on a course of approx 11,000 metres (the acronym ‘10k’ had yet to be invented). Six runners broke away shortly after the start – Walsh, Crowley, McGann, Paddy Murphy, Tom O’Riordan and his namesake, Pat O’Riordan. The latter, also a Leevale man, soon suffered an injury and had to drop out.

This was the signal for Walsh to take the lead and in a fiercely contested last mile he withstood the tremendous challenge of the chasing bunch to reach the sanctuary of the tape just six seconds ahead of former winner and fellow Corkman, Richie Crowley. Murphy, from Kildare, took third with McGann fourth, John Scanlon from Galway fifth and journalist Tom O’Riordan sixth.

The headline on the Cork Examiner the following day read ‘Day of glory for Walsh and Leevale’, and so it was. And there was to be further glory for Walsh the following month at Tuam Racecourse when, on February 24, he retained his BLE Inter-Clubs crown ahead of Joe Scanlon, Fr Paddy Coyle and Danny McDaid.

However, Donore gained revenge over Leevale when taking the team title by nine points, 33 to 42. Remarkably, given all their achievements over the four decades since, it’s still the one national honour that has eluded the Cork club.