Derval O’Rourke is determined to end her athletics career on a high note, as she tells Marie Crowe. 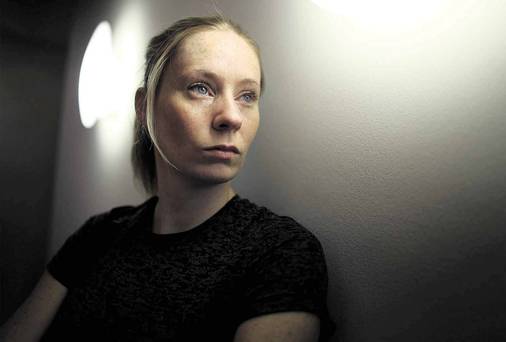 A relaxed Derval O’Rourke strolls into the bustling Cake Café in Dublin City centre, the staff rush to greet her. Not because she is a famous athlete, arguably the best sprinter the country has seen, but more for her baking skills. She’s been in the specialist café on many occasions, talked to the staff about what they do and discussed recipes, not sport. When O’Rourke isn’t running, baking is her thing and many of Ireland’s elite athletes will testify to that.

The former world champion is rarely seen these days without a batch of her latest gourmet treats, goodies to share with friends, training partners and anyone who wishes to indulge. And this day was no different; inside the multi-coloured tin O’Rourke was carrying were some healthy flapjacks.

Thinking of others is something else that O’Rourke has become known for. Before the last Olympics she volunteered at the DSPCA and she is regularly sought out by other athletes to lend an expert yet sympathetic ear.

She cares about her counterparts, knows what it is like to be in a dark place after a race doesn’t go to plan or another injury has struck, and she despairs at the thoughts of others feeling down.

“Athlete welfare is something that I’ve got more interested in recently,” she says. “I think it’s an area that we need to work on. By we, I mean the sport. I’m part of the sport. I think it’s easy to stand back and criticise it and sometimes I do but I also think you have to be solution-driven. And I think there are things that need to be done that aren’t yet.”

O’Rourke says athletes need a smoother transition from their sporting career back to the working world. She worries too about mental health issues. Just before Christmas British runner Jack Greene said he was taking some time out of the sport to deal with depression. It’s a situation she believes many elite athletes can relate to. Athletics, by its nature, is mostly for individuals and when things are going well it’s great but when they aren’t athletes can be very isolated.

Having world-class experience and being able to successfully communicate with athletes on their level is a rare thing in a small country like Ireland. It could be a formidable combination if utilised correctly; however, after O’Rourke retires there are no guarantees she will stay in the sport.

“I would stay in it if it was in a formal, meaningful manner. Sometimes with former athletes I don’t think we are engaged enough. To do something like invite someone out to talk for 20 minutes isn’t meaningful; I think it’s just covering over the cracks.

“It’s not sitting down with an athlete and saying how did you do it, how did you get from being in Cork and being an average hurdler to being a world indoor champion or winning medals. We should be talking about the process. I would stay in the sport only if I felt it would make a difference, not if I felt it was just for the image.”

Aside from the uncertainty that surrounds certain aspects of her sport, O’Rourke is happy with what she does. It’s fair to say athletics is the love of her life, a few hours before our meeting she’d ran on grass for the first time without pain since undergoing surgery on her Achilles last August.

This means her rehab is on track and she’s preparing for another season of racing. Firstly, though, she needs funding. A recent meeting with the high performance director for Athletics Ireland, Kevin Ankrom, has given her hope that she may get a bit more than the €12,000 she received last year.

“I had a meeting recently with Kevin; he wanted to know what was going on with me, what my plans were. It was the first time we’d had a meeting since our funding meeting last year. I put my case to him, when I come back for this season it’s to try and win European outdoors. It’s not to try and qualify or get in a heat or semi. I’m coming back to try and win it.

“Athletics Ireland need to get on board and support that and I got the impression from the meeting that he understood that. I think they know that I put such a savage effort into my rehab that it can only be with the notion of doing very well at European outdoors.”

That O’Rourke’s funding was cut by 70 per cent last year was difficult for her to take, but she is a realist; it was purely business not personal so she tried not to let it get to her. All the same she was irritated, and felt that Athletics Ireland could have put some faith in her, shown her results over the years a bit more respect. But she didn’t dwell on it. Instead she got busy preparing for the European Indoors where she finished fourth. However, she is likely to be elevated to third as the Turkish athlete who won the race, Nevin Yanit, has since failed a dope test.

It’s almost a year since that race and still there is no sign of the medal coming. Athletics Ireland have been told to consider her a bronze medallist for funding purposes and that offers some consolation for O’Rourke. She says she is happy that doping bans are increasing from two to four years but ultimately feels that offenders should be banned for life.

“That’s very harsh, I realise that, I also realise that people deserve a second chance. But from my perspective, where I’m sitting, I’m someone who has been affected by someone who has taken drugs and I’ve lost medals to people who have taken drugs. I’m the girl who has finished fourth so it’s hard for me to have sympathy and also there isn’t a lot of research into the effects of taking drugs long-term. So when people come back is it a level playing field? I’m not sure. I’m probably too close to it, too emotional to be objective so it’s better that other people make those decisions. I’m really happy with four-year bans I just wish that they had been there during my career.”

The conversation drifts from her medal to her Association and it’s clear that O’Rourke doesn’t have a big relationship with Ankrom. They get on fine on the rare occasion they sit down and talk. In fact, she finds him quite personable.

“I don’t know what the key performers are for his job; I don’t know what he has to do to be doing his job well. He’s come into a position where there is a high turnover of performance managers. There has been a lot of them in my career, a lot of the senior athletes like me and Rob Heffernan and Dave Gillick have our system in place so it’s hard for him to come in and manage us. And I appreciate that from his and our point of view. So I think he is more focused on the juniors and developing athletes but that’s hard on the seniors who think they don’t matter anymore.

“He’s definitely putting plans on paper, long-term strategic plans. That seems to be the area he focuses on, the paperwork of it as opposed to holding relationships with the athletes, maybe that’s the direction that he is being told to go in, I don’t know.”

O’Rourke doesn’t think that’s enough. She believes you need a HP manager who has a really good relationship with the athletes; ultimately the athletes need to feel like that person is on their team. All the same she has a lot of respect for the role, knows that it isn’t easy telling someone that they are not good enough or their performances aren’t good enough.

“Just because someone wants to run fast doesn’t mean they will and he [Ankrom] has to make tough decisions. If I wrote the job spec it would be different but I don’t run AI and I think everyone has to be careful because none of us know. When I think of the overall HP budget and how it is spent, I would spend it differently. I don’t know what the wages are, we just hear reports of the wages, everything has to come out of that one pot and if your wages are very high then that is less money to go into development programmes. For a country that has been on its knees for a few years, you have to spend your money wisely.”

By the time O’Rourke’s day is done there are usually very few of her home-made treats left to share with her husband Peter O’Leary. The two Olympians were married last September in their native Cork. Before the 2012 Games, O’Leary hit the headlines for betting on a race he was in four years previously. He was cleared of any wrongdoing but O’Rourke, because of her profile, also found herself in the spotlight. It was a difficult time for the couple.

“I would have hoped for a little bit more respect for what we are about to try and do at the Olympics. I felt let down by certain members of the media and what went on and even the coverage then when the case was cleared was so small but I know that’s how the media works. I’m pretty tough but Peter isn’t in the media as much as I would be.

“He found it really hard and seeing him finding it hard the week when he was competing at the Olympic Games wasn’t easy. He had such amazing preparation for it and he went into it in such a good position and he probably had his worst result in about two years. I was hurt by it all.”

O’Rourke has always dreamed of making an Olympic final and she narrowly missed out in London. Although it’s impossible to say for sure if the negative run-up affected her performance, realistically it’s hard to see how it wouldn’t.

O’Rourke is clearly totally at ease with herself now, advising on food, hair down, relaxed. She seems a million miles away from the girl in the starting blocks, wearing the green shorts and crop top, with her hair scraped back and an intense look on her face.

Like it or not the softer side to O’Rourke will sooner rather than later replace the one that we are used to seeing. Time waits for no one and that is especially true in the world of sport. O’Rourke herself knows this more than anyone. But she still has plans, albeit short-term ones, but plans nonetheless. She hopes to compete at the European Outdoors in Zurich and then she will reassess.

“It’s not like you can leave and take a break and go back to it. I think once you are done you are done. It will be very definite. I thought about retiring after London. I was so disappointed; I would have left on such a negative note.

“So I said I’d give it another year and I’m going to run really well so I can leave it the way it should be left — loving it.”