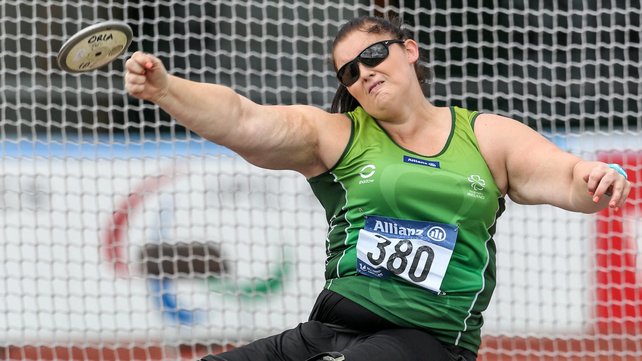 Orla Barry became the third Irish athlete to medal at the IPC Athletics European Championships in Swansea when she claimed silver in the F57 discus today.

With a best throw of 28.13m, the 24-year-old Irish athlete bettered a season’s best from German athlete Ilke Wyludda in third, who threw 27.63m.
The gold medal was won by Bulgaria’s Stela Eneva, also with a season’s best of 31.88m.

Barry, who is a double amputee, said: “I’m really happy to win silver.
“I hadn’t been throwing that well in training the last while, so to perform far better today at a championships when it really counts is great. I’m delighted.”

“The German thrower she beat into bronze was a former Olympic champion and able-bodied world record holder before she lost her leg a number of years ago so has an amazing pedigree in the sport.

“The Bulgarian who won was only competing in the F57 class for the first time, having been reclassified from the less-impaired F58 and was so consistent and impressive.”

“Orla is a real championship performer and she showed that again today, and that is testament and credit to her personal coach Pat Furlong also.”
Report: RTE.ie