The following will appear in this week’s edition of Athletics Weekly.
Article courtesy of John Walshe
ONE of the most consistent performers in the history of the British and Irish Masters Cross-Country International must undoubtedly be Irishwoman Carmel Parnell, writes John Walshe.

Her W55 title at Wollaton Park three weeks ago made it nine overall titles, which includes five in succession in her current age group. For good measure, she has also got two runner-up medals in her collection, along with a number of team awards.

She also led the Irish team to a rare victory over England at the Nottingham venue, and understandably was well pleased with another successful autumn foray over the country.

“I found the course this year fine. It started on a hill but the running underfoot was very good and conditions were lovely and mild,” said Parnell, speaking a week later just after finishing fifth overall in the combined Munster [Irish Regional] Masters Championships at Watergrasshill. 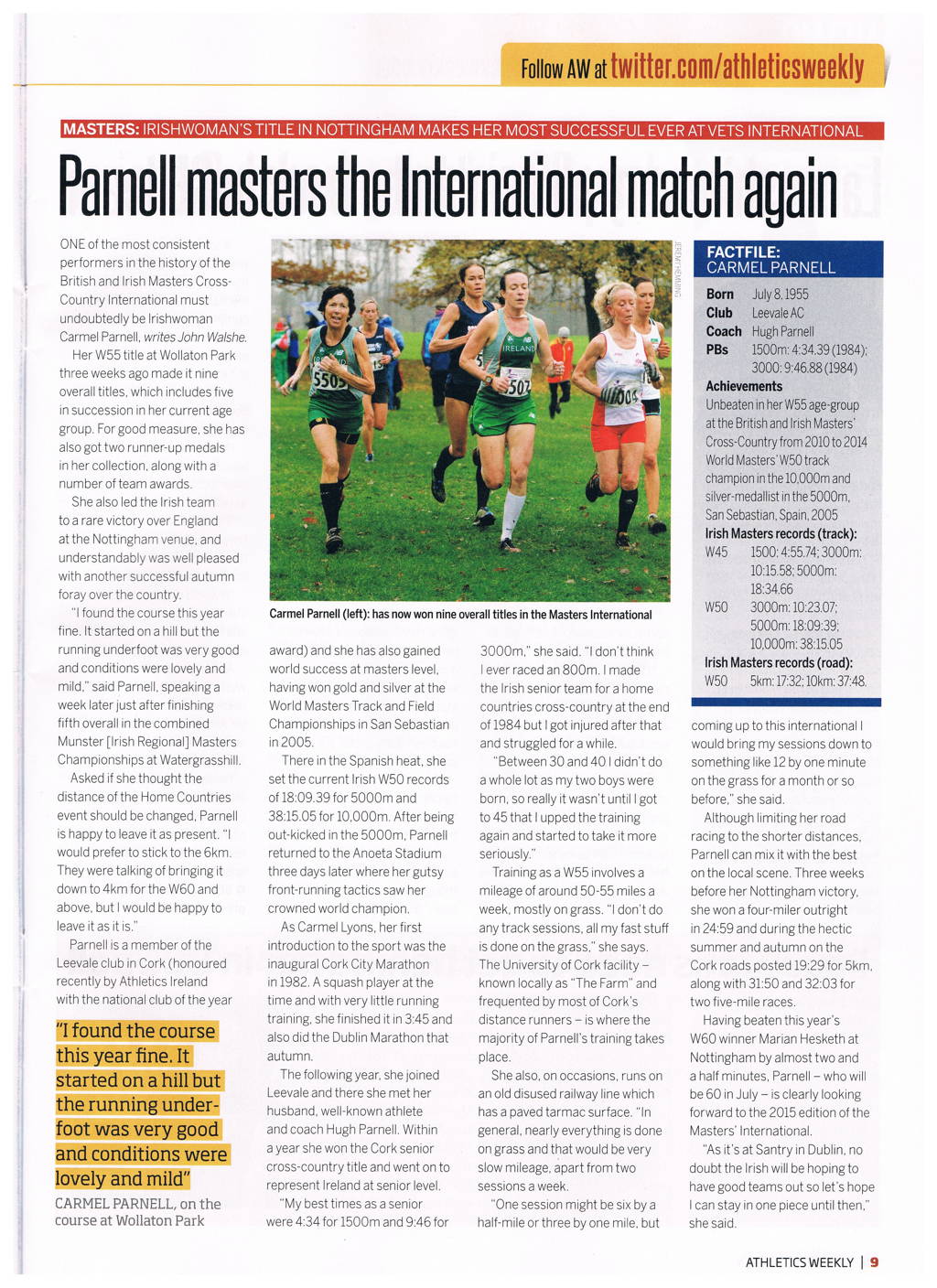 Asked if she thought the distance of the Home Countries event should be changed, Parnell is happy to leave it as present. “I would prefer to stick to the 6km. They were talking of bringing it down to 4km for the W60 and above, but I would be happy to leave it as it is.”

Parnell is a member of the Leevale club in Cork (honoured recently by Athletics Ireland with the national club of the year award) and she has also gained world success at masters level, having won gold and silver at the World Masters Track and Field Championships in San Sebastian in 2005.

There in the Spanish heat, she set the current Irish W50 records of 18:09.39 for 5000m and 38:15.05 for 10,000m, After being out-kicked in the 5000m, Parnell returned to the Anoeta Stadium three days later where her gutsy front-running tactics saw her crowned world champion.

As Carmel Lyons, her first introduction to the sport was the inaugural Cork City Marathon in 1982 A squash player at the time and with very little running training, she finished it in 3:45 and also did the Dublin Marathon that autumn.

The following year, she joined Leevale and there she met her husband, well-known athlete and coach Hugh Parnell. Within a year she won the Cork senior cross-country title and went on to represent Ireland at senior level.

“Between 30 and 40 I didn’t do a whole lot as my two boys were born, so really it wasn’t until I got to 45 that I upped the training again and started to take it more seriously.”

Training as a W55 involves a mileage of around 50-55 miles a week, mostly on grass. “I don’t do any track sessions, all my fast stuff is done on the grass,” she says. The University of Cork facility known locally as “The Farm” and frequented by most of Cork’s distance runners — is where the majority of Parnell’s training takes place.

She also, on occasions, runs on an old disused railway line which has a paved tarmac surface. “In general, nearly everything is done on grass and that would be very slow mileage, apart from two sessions a week.

“One session might be six by a half-mile or three by one mile, but coming up to this international I would bring my sessions down to something like 12 by one minute on the grass for a month or so before,” she said.

Although limiting her road racing to the shorter distances, Parnell can mix it with the best on the local scene. Three weeks before her Nottingham victory, she won a four-miler outright in 24:59 and during the hectic summer and autumn on the Cork roads posted 19:29 for 5km, along with 31:50 and 32:03 for two five-mile races.

Having beaten this year’s W60 winner Marian Hesketh at Nottingham by almost two and a half minutes, Parnell — who will be 60 in July — is clearly looking forward to the 2015 edition of the Masters’ International.

“As it’s at Santry in Dublin, no doubt the Irish will be hoping to have good teams out so let’s hope I can stay in one piece until then,” she said.