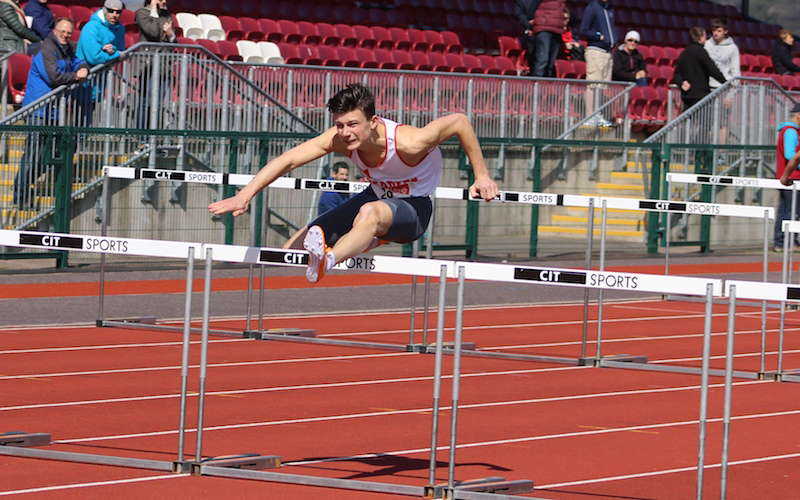 There were great performances at the Leevale 2015 T&F meet with a national junior record and plenty of standards for the rising stars in athletics.

Elizabeth Morland started the day off with an EYOF standard in the women’s youth 100m hurdles race, with win in 13.93 seconds with a legal wind of -1.9.

Matthew Behan and Sam Healy prepared to battle it out in the junior 110m hurdles. Unfortunately at 50m Sam hit a hurdle, leaving Matthew to take the race on which he did in style, setting a new junior record of 13.99 in a legal wind of -0.3. This also give Matthew the European junior standard. The officials also considered this the male performance of the meet.

Aaron McGlynn (Finn Valley AC) travelled from Donegal to compete in the 400m. The trip was worth his while when he achieved the EYOF qualifying standard with a 49.94 run.

Marcus Lawler’s time of 21.14 in the 200m was inside the qualifying time European u23 Championships. Marcus also won the 100m race, earning him the Bernard Walley perpetual trophy.

Laura Crowe received the women’s performance of the meet for her convincing run the women’s 800m, which she won in 2:07.50.

Leevale’s Colm Sheahan won the Laim Horgan memorial trophy by taking victory in the mens 3000m in a very respectable 8:43.96

Some of the 100-800m were run as graded finals, the overall results being decided on times. Results by heat