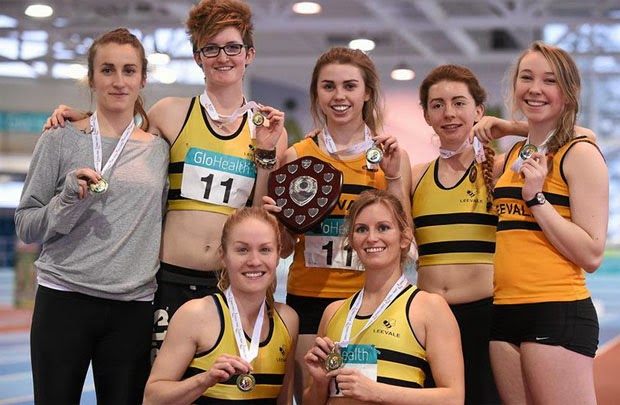 On a busy weekend in the athletics calendar, the Leevale men’s and women’s team went into todays final of the AAI Indoor Leagues hoping to retain their titles from last year. Both teams had comfortably qualified from the first two rounds.

Buoyed by strong performances by Andrea Bickerdike (400m), Louise Shanhan (800m) and Carol Finn (1,500m) the Leevale women’s team would be hard to topple. Galway club Craughwell AC had other ideas with Sinead Treacy claiming a classy double over 60m and 200m. Club mate Catriona Farrell did likewise securing maximum points in the long jump and high jump events. Like the men’s competition, the women’s event would be decided in the final track event of the day, the 4x200m relay. Craughwell made a strong start to the relay leading after the first two legs; however Leevale powered into the lead over the second half of the race to take victory in a time of 1:45.45. The victory secured the Leevale team overall victory with a points total of 76, only one point ahead of Craughwell AC on 75 points. Clonliffe Harriers finished in third place with a score of 62 points.

The men’s competition turned into a great battle between Dublin clubs Clonliffe Harriers, Tallaght AC and defending champions Leevale AC. Tallaght were boosted by individual victories by Anthony Lieghio (1500m), Joshua Essuman (60mH) and the Joseph Ojewumi (200m). Clonliffe Harrier athletes David Donegan and Andrew Heaney secured victories in their respective pole vault and high jump events. Dave Tierney bagged maximum points for Leevale in the shot putt with the rest of the Leevale team producing consistent performances across all the events. It meant going into the final event of the day, the 4x200m relay, there were only two points separating the top three teams. Tallaght AC showcased their strength in depth in the sprint events by storming to victory in a time of 1:29.89 seconds ahead of Clonliffe Harriers and Leevale The result means that Tallaght took overall victory on countback from Clonliffe, with the Leevale team taking bronze.