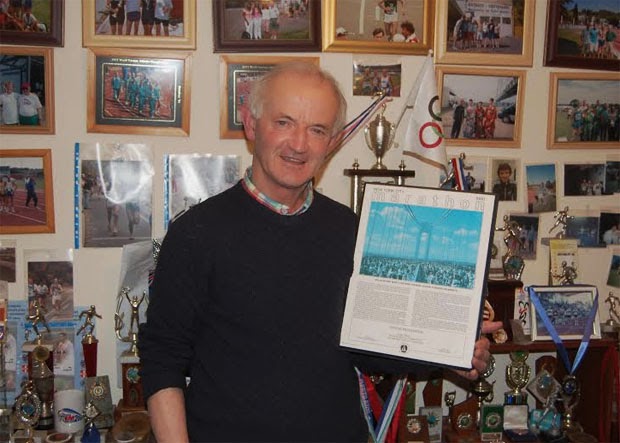 At 3pm on a warm May Sunday all of 40 years ago, the Irish (BLE) National Marathon took place at Galway, on an out and back route that started and finished on Wood Quay.

After coming second the year before to Danny McDaid, Dick Hodgins was better prepared on this occasion and the Cork bank official took the national title in a time of 2:19:46, 23 seconds ahead of local man Mick Molloy with Jim McNamara of Donore in third.

Although this was his first marathon victory, Hodgins – now Meet Director of the Cork City Sports – was no stranger to Irish titles. During the previous 12 years he had won championships over a variety of distances from 1500m on the track to 15 miles on the road.

What made the Galway win all the sweeter was the fact that his Leevale club took the team award, their three scoring runners all finishing in the top six. Mike Murphy, Cork-born but then living in Manchester where he ran for the famous Salford Harriers, finished fifth in 2:24:33 and one place behind came another man named Murphy.

To the hundreds of runners now seen daily on the roads of the city and county, the name of Jerry Murphy from Douglas wouldn’t probably ring a bell. Indeed, his near neighbour in Gartan Park, John O’Leary – a regular prize winner on the road race circuit in the M70 category – would be far better known.

Yet, the man who closed in the Leevale team on that unforgettable day four decades ago has played a significant role in the story of local athletics, even though he might now be described as ‘the forgotten man of Cork marathoning.’

Sitting in his front room surrounded by prizes, plaques and photographs of a running career that has taken him around the world, Jerry Murphy casts his mind back to that personal best run of 2:24:46 on the roads of Galway.

“I remember waking up in the morning and looking out the window and Mike Murphy saying to me ‘there’s going to be a lot of people suffering here today’. Suffering wasn’t bothering me as I had only one thing in mind, and that was to get the qualifying time to make the Irish team for one of the invitational marathons, such as Enshede or Bercham in Holland, or Kosice in Czechoslovakia.”

Jerry had run his first marathon three years before, the 1972 Olympic trial in Athlone won by his clubmate, Donie Walsh. “I think I finished in around 3:15, and when I crossed the line I said this is it, never again.”

He had been running three or four years at that stage, having joined Leevale in 1969. “I played minor hurling and football with Douglas, along with a bit of soccer for Grange Vale. There was nothing else to do in those years, but when I started running, that became the main thing.” Jerry Murphy with his certificate from the 1980 New York Marathon

Leevale at the time boasted some of the best marathon runners in the country, as along with Walsh and Hodgins there were also the likes of Jackie O’Callaghan, Liam Horgan and Sean Healy. Advice was easy to come by, even from the top exponents.

“When I went into the marathon I felt I was very fortunate because you had the likes of Mick Molloy, Paddy Coyle, Danny McDaid, Jim McNamara and Dessie McGann and to them there was no such thing as walls. If you wanted to be a marathon runner you put your head down and took the pain and punishment.”

Before the big city marathons that now attract the thousands, a small number of established European events would send out invitations to the national federations and Murphy was delighted to wear the green of Ireland on a number of occasions.

“I ran in Enshede and Bercham twice, along with a 25km race in Bolton and the Glasgow Marathon. Before I made the Irish team, I went to Enshede with Donie Walsh and Dick Hodgins as part of a Leevale team and we were the first club European club to take part in that race.”

A rather unique marathon from that era was the Barnsley Mid-Winter Marathon. Held in early December, weather conditions in the Northern English mining town weren’t always favourable. Murphy finished fourth in the 1975 race in 2:24:52, just outside his time from Galway six months before.

Back home, one of his most memorable achievements came around the roads of Rathkeale in County Limerick in May of 1979. There, on his 29th birthday, he won the Munster marathon championship in 2:28:47 with his clubmate, the late Liam Horgan, second in 2:31:44 and Michael Joyce of St Finbarr’s third in 2:39:16.

The following year, along with Michael Joyce and Willie Hayes from Reenavanna Harriers (now with St Finbarr’s), Jerry travelled to New York for one of the first marathons to take place around the five boroughs of the Big Apple. With all three wearing Discover Ireland singlets, he finished in a time of 2:31:44 with Hayes close behind on 2:31:58 and Joyce recording 2:38:05.

When asked what training was like in those days, Murphy frankly replies: “I never trained, I crucified the body. I would often do a 32 mile run on a Sunday morning and then go out that evening for four miles, and if I met Dick Hodgins I could end up doing another 10.”

Working as a bank porter in Cobh at the time, he used to cycle from Douglas to Kent Station in the morning and repeat the journey each evening, before then going out training. “I’d always do around 15 miles, certainly nothing under 10, and I’d be running up to 120 miles a week at the time, even getting up to 165 miles on a few occasions. Looking back now, I realise that kind of mileage wasn’t necessary.

“Dick Hodgins was a great help to me; we ran from home, up Maryborough Hill and out to Ringsaskiddy and back by Monkstown. When Dick eased off around 1980, he was an awful loss to me as he was a very steady runner, he would run even pace and we would talk athletics all the way.”

Another training partner was Ray Treacy (brother of John) before he took up an athletics scholarship at Providence College where he is now head coach.

“We used to do a 20 mile time-trial on a Saturday and I remember one year after running the 20 miles in the morning I travelled down to Killarney on the Verolme Dockyard bus where there was four-mile Inter Firm race that night.

“I decided to do a couple of miles warmup to see how I felt and after that I said I’d run the race and I ended up being beaten in a sprint for third. I felt great, I was flying!”

Despite a number of health problems, Jerry continued to run and race in many exotic locations, including the Sea of Galilee Marathon twice. He has also travelled as a member of the Bank of Ireland team to many countries and has completed a race of some description on every continent.

“It was after that New York Marathon of 1980 that I feel my problems began,” he says. “I didn’t realise at the time that I had diabetes and it wasn’t discovered until 20 years later but the symptoms were there and the medical people make out that I had it that long ago. Also, I was unaware at the time that I was also celiac.”

Jerry was a mainstay of many a winning Leevale cross-country team and has the unique distinction of having competed in over 30 Cork senior championships. Nowadays, he is happy to get out and do his two miles as often as he can, usually in the company of John O’Leary whom he introduced to the sport almost 40 years ago.

His love of athletics has never dimmed and it has taken him too many global championships, including a number of World Cross-Country events and most recently the European Indoor Masters.

“I always say, you can count the years and count the medals but you’ll never count the friends that I have made on five continents, the memories I have mean more to me than any medals or cups I’ve won.

“What changed my life was when in 1969 I joined the Leevale club, everything was history after that. That was the moment.”