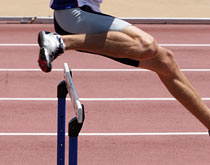 The County Graded T&F Leagues are in full swing and are proving a great platform for putting down benchmark performances in a more informal setting than a traditional T&F meet.

There were some impressive performances at last night’s meet, which was the third in the series. Sinead O’Connor had a good 9:52 in the 3K and Jessica Neville was 2nd home in the 200m, clocking 26.48. Andrea Bickerdike had another good run over 800m, ever consistent in 2:18. Niamh Roe was 3rd woman home in the 3K.